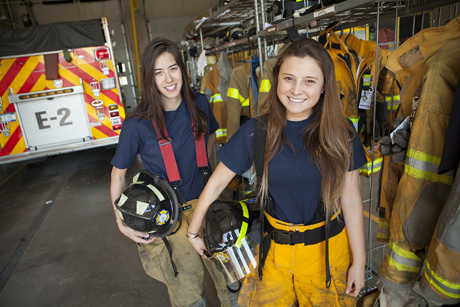 For decades, Cornell students have been volunteering as firefighters at the Cayuga Heights Fire Department. Whether they’re in the library or out on a date, they are on call and ready to serve the community at a moment’s notice.

Under the guidance of Chief George Tamborelle, the students join forces with Ithacans to become New York-state certified firefighters. Tamborelle said the intense training required to become a firefighter “entails a solid commitment.” But the enthusiastic Cornellians who are dedicated to the fire department’s mission have no problem putting in the hours, he said.

The training is “physically taxing and mentally challenging,” said Carolyn Scheinberg ’15, who has been training for her interior certification, which allows a firefighter to enter a burning building, for seven months.

As part of the training, Scheinberg said she and a partner entered a burning building, rescuing dummy victims, with blind shields on their eyes to mimic dense smoke and heat. Scheinberg described the adrenaline-boosting experience of feeling her way around as “stressful and draining.” The practice of finding pseudo victims amid chaos and bringing them to safety “reminds me what serious responsibility I have and the importance of my service.”

“Once they join the department, we look at everybody as a firefighter and stop looking at them as students,” Tamborelle said. Twenty-three Cornell student volunteers currently serve on the squad.

Whether the firefighters are doing classroom preparation or athletic obstacle courses, everyone is growing and working together, Tamborelle said. “I’ve developed some of my closest friendships through working at the fire department,” he added.

Tamara Jamil ’15, a member of the department for 13 months, agrees: “The people at the fire station have truly become a family to me.” She says responding to calls and being a part of a tight-knit team “has taught me discipline and responsibility.”

Jamil first became interested in firefighting when she witnessed the devastating effects of fire at a children’s burn hospital. She remembers thinking, “If there is anything I could ever do to stop this from happening, I would.” When she came to Cornell and heard about the Cayuga Heights Fire Department, she immediately wanted to get involved.

While Jamil is active in many other organizations on campus, she emphasizes how important it is to “make time to give back to the community.” Volunteers are required to respond to at least 15 percent of the 600 calls received per year and attend 25 percent of weekly trainings. Jamil notes she spends about 15 hours per week volunteering, but hours vary by student.

“Next year I plan to live in the fire station, in which case I’ll be volunteering about 40 hours per week,” Jamil said.

Far from an obligation, Tamborelle said volunteers “just fall in love with firefighting, and for many it becomes a calling.” He encourages those with an interest in volunteering to come by the department.

“There are jobs for everyone. … You don’t have to be 6 feet tall and 220 pounds” to be a successful firefighter, he added.

Take Chrissy Walker, MPA ’09, Tamborelle said. She is 5-foot-4 and “was a ferocious firefighter.”

The department recruits twice a year and always needs volunteers.

Abigail Warren '15 is a writer intern for the Cornell Chronicle.