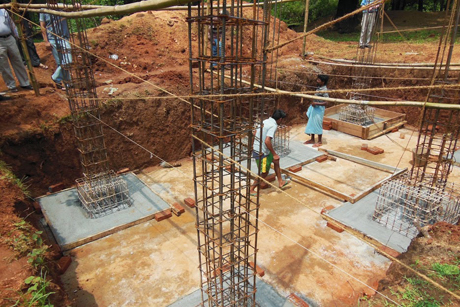 Maysoon Sharif
A water treatment plant construction site in the village of Gufu. Columns for the base of the overhead tank are visible.

Student engineers of AguaClara at Cornell, a research team that has designed eight water treatment plants now operating in Honduras, are expanding their efforts to another continent. Two AguaClara facilities, under construction in the state of Jharkhand, India, are expected to be completed this fall.

Since its founding in 2005, AguaClara has worked to bring cost-effective, municipal-scale water treatment technologies to communities in Honduras, where more than half the population cannot access safe water. They have partnered with the Honduran nonprofit Agua Para el Pueblo to provide designs and transfer the water treatment technologies to communities.

In 2012 AguaClara was tapped by the newly formed Tata-Cornell Initiative in Agriculture and Nutrition (TACO-AN) to improve the lives of villagers in remote parts of India. TACO-AN was founded through a $25 million endowment from the Tata Trusts, chaired by Ratan Tata ’59, B.Arch. ’62. 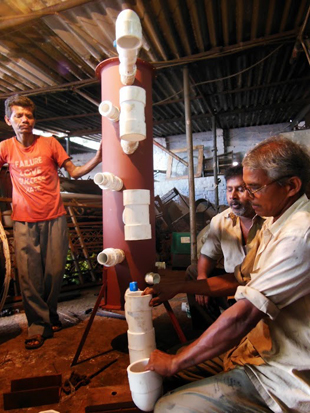 Maysoon Sharif
A low flow stacked rapid sand filter being fabricated for one of the AguaClara water treatment plants in Jharkhand, India.

AguaClara LLC is working with the Indian nonprofit Pradan on two water treatment facilities, one in the village of Gufu, and another in Ronhe. Maysoon Sharif ’10, M.Eng. ’11, is a design engineer and co-owner of AguaClara LLC (the other owner is Sarah Long ’09). Sharif has been in India since May overseeing the implementation of AguaClara technologies in the water treatment projects, which have required further innovation because the context of the water problems in India is different, Sharif said.

“The communities were much smaller than we’ve dealt with before, and the sources for water distribution were shallow groundwater instead of surface water like in Honduras,” Sharif said.

In India, AguaClara LLC is piloting what’s called a low flow stacked rapid sand filter, coupled with a chemical dose controller that automatically keeps the dose of water treatment chemicals consistent. The sand filter is a scaled-down version of one in use in Honduras, which was invented by AguaClara at Cornell and requires only a fraction of the area of a rapid sand filter, Sharif said.

In the Indian villages, a solar-powered pump will lift water to an AguaClara facility atop an overhead water storage tank, Sharif said. The raw water will be dosed precisely with coagulant, using the chemical dose controller, then divided among three sand filters and, finally, treated with chlorine using the dose controller again.

TACO-AN is funding AguaClara LLC’s role in the projects, and Tata Trusts is funding the implementation of the solar pumping system, AguaClara treatment facilities, water tanks and distribution systems.