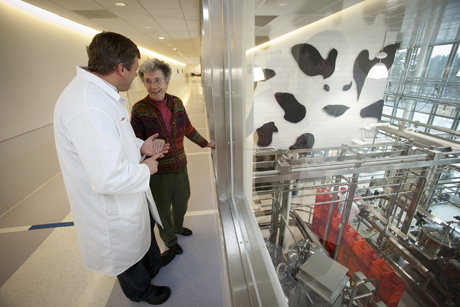 It’s been a tough three years for fans of Cornell Dairy ice cream, left without a lick of Clocktower Pumpkin while the food science department’s dairy plant at Stocking Hall was being rebuilt.

Disappointed alums returning to campus first saw piles of demolition rubble where the old dairy plant had crumbled like so much butter brickle. As supplies of the real stuff ran out, graduating seniors had to add an asterisk by No. 12 of “161 Things Every Cornellian Should Do.”

The unofficial title, Best College Ice Cream in the East, by default went to a longtime rival still churning out Peachy Paterno in Happy Valley, the Penn State Creamery. 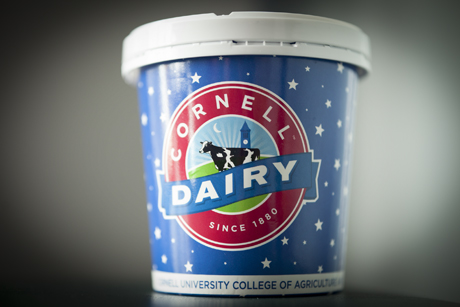 Here’s the agonizing part: No tasting until January 2014. No exceptions. Not even the new-and-expanded dairy store (unmarked but easily located with its towering, white sculpture of a milk bottle) has a scoop to spare.

“We have to build up inventory of all the flavors before we release to the public,” explains Jason R. Huck, manager of the pilot facility. “We wish it could be sooner, but we want to get this right.”

One complication, Huck says, is “the whole allergen issue.” Every time an ingredient some people are allergic to – nuts in Tin Roof Sundae, for instance – passes through, the whole system has to be fully cleaned. Even at 350 three-gallon tubs per weekly production run, inventory-building takes time. Huck wants to have 10,000 gallons of Cornell Dairy ice cream in cold storage before the planned release date, Jan. 14.

“I appreciate all that, but I still can’t wait,” says one alumna who has cherished Cornell Dairy ice cream for more than 60 years. Jane Wigsten McGonigal, 84, earned her first Cornell degree in 1950, and her Ph.D. in 1984, and worked as a Cornell Cooperative Extension agent in counties around the state and as a CCE administrator here on campus, before retiring in 1996.

From her home on Ithaca’s South Hill, McGonigal motors past Stocking Hall to the Helen Newman fitness center – all the while dreaming of an après-workout cone or cup to reward her athletic efforts. Yes, she’s made the four-hour road trip to State College, Pa., to sample the Creamery’s best. “It just doesn’t measure up to Cornell Dairy ice cream,” she insists.

“It just is!” McGonigal says.

For her part, Kathryn Boor, the Ronald P. Lynch Dean of the College of Agriculture and Life Science (and professor and former chair of the Department of Food Science), remains confident that the return of Cornell Dairy ice cream marks the end of Penn State’s upper hand in the ice cream wars.

“The state-of-the-art dairy research and production facilities in the new Stocking Hall now match the excellence of our food science faculty, students and staff,” Boor says. “Why settle for just delivering the best college ice cream in the east, when we can now produce the finest in America?”