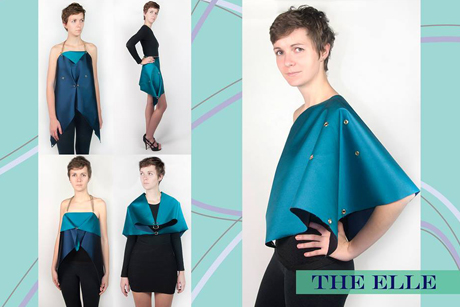 Justine Lee
Marianne Dorado '14 models a look from Justine Lee's winning collection, showing how one piece can be converted from a skirt to a shirt or bolero. 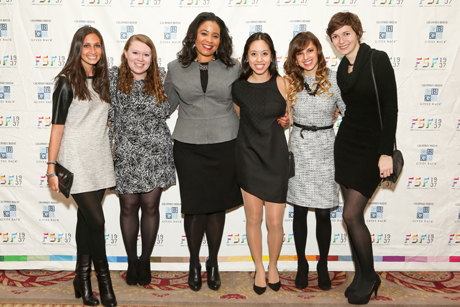 For her brand of convertible and sustainable apparel and accessories made from 3-D printers, laser cutters and other high-tech machinery, Cornell senior fashion design major Justine Lee received a $30,000 Geoffrey Beene National Scholarship from the YMA Fashion Scholarship Fund.

Lee’s winning concept is quintessentially American: giving young women the freedom to transform their garments into creative combinations that meet their individual style and needs. Her idea, branded as ADD (American Design & Detail) includes, for instance, a skirt that can be transformed into a shirt or a bolero in a few simple steps, and purse and shirt straps that double as belts and bracelets.

“The most unique aspect of ADD is that it is a clothing system,” said Lee, a student in the Department of Fiber Science & Apparel Design (FSAD) in the College of Human Ecology. “Customers build up their wardrobe by accumulating product components that they use to design and construct their own fashion looks and bags. The brand redefines how female American millennials can dress because of the level of customization involved.”

Her concept also capitalizes on the nascent revival of American fashion manufacturing after years of industry offshoring to China and other locations around the globe to cut costs. Lee interviewed a variety of U.S. brand owners about the pros and cons of domestic production, and her research revealed that the United States manufactures only 2 percent of the apparel it buys.

She said that a domestically produced line would appeal to younger consumers, who increasingly want to know the origins of their food, clothing and other goods. The line’s versatility also means that a handful of pieces can yield a wide combination of styles, saving consumers money and leading to less waste.

Lee’s proposal included a comprehensive business plan with details on pricing, marketing, promotion, production costs and more. “I’ve been working on this project every day since May,” she added, crediting FSAD associate professor Van Dyk Lewis and senior lecturer Anita Racine for their guidance.

“In every phase of the competition process, Justine was self-critical, continually revising her work,” Racine said of the nine-month process. “She was meticulous in her attention to details and fully believed in the success of her designs.”

Lee, from Los Angeles, was one of four recipients of the competition’s highest award, which attracted more than 250 applicants from 41 universities. She’s the third top winner from Cornell’s fashion design program in the past six years.

Racine attributes the success in part to the FSAD department’s embrace of advanced equipment and computer-guided techniques.

“Cornell students are fortunate to have the new technologies on campus for design experimentation and refinement, making their fashion projects much more than just prototypes,” she added.

“Gaining exposure to and mentorship from the fashion industry’s top professionals is invaluable,” Lee said. “It’s such an incredible honor to be recognized by such well-respected apparel industry veterans and executives.”