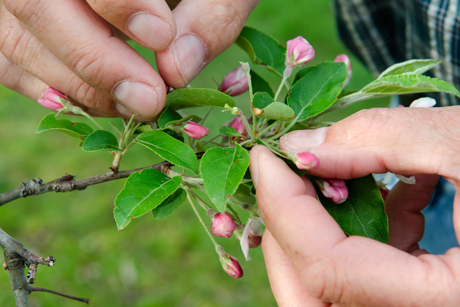 Robyn Wishna
Breeders may soon be able to predict the acid-producing potential of apple trees without waiting for fruit, thanks to research by Cornell horticulture professor Kenong Xu.

Acidity can make or break an apple variety: both pucker-inducing tartness and low acidity that are unacceptable to consumers. With a new grant from the Agriculture and Food Research Initiative (AFRI), a Cornell apple researcher hopes to understand a key gene in acid production and deliver reliable tools to predict the acid-producing potential of tiny seedlings in apple breeding programs around the world.

The $410,000 grant will allow Kenong Xu, an assistant professor of horticulture at Cornell’s New York State Agricultural Experiment Station in Geneva, to analyze the function of the likely gatekeeper of apple acidity, a gene called Ma1. The research was prompted by Cornell apple breeder Susan Brown, Cornell horticulture professor Lailiang Chang and Miguel Piñeros, a research plant physiologist with the U.S. Department of Agriculture’s Agricultural Research Service are both co-leads on the project.

“Acidity and sugar content are fundamental aspects of [taste] quality. When acidity is too low, apples aren’t marketable, and if it’s high, it needs to be balanced with sweetness,” Xu said.

Malic acid can make wild and domesticated apples as tart as lemons, with a pH of 2.8, or mild like tomatoes with a pH of 4.6. Usually 25 percent of trees inbreeding programs carry the genes for low acidity, but breeders don’t know until the trees mature, wasting a large investment in time and acres.

Preliminary work funded by the New York State Apple Research and Development Program identified the Ma1 gene and other regions in the apple genome that are important. Using the offspring of royal gala and wild apples from Kazakhstan, Xu’s lab has narrowed down the location of the most influential Ma1 gene, which is turned up in high-acid fruit and turned down in lower-acid apples.

The researchers also noticed that the low acid version of the gene contained a single mutation that caused a shorter, and presumably less functional, protein. In screening many apple varieties, they found that this mutation correlated with low acidity.

The AFRI grant will allow the researchers to identify the specific cellular location of the Ma1 protein and to explore complexity in acidity, by targeting an additional gene that appears to play an important role in acidity. By the project’s end, Xu hopes to have an easy, reliable molecular marker that will help breeders cull seedlings that have the potential for too high or low acid production.

Another $500,000 AFRI grant will allow breeder Martha Mutschler-Chu to deepen her understanding of different types of acylsugars – sugars produced and exuded from hairs (trichomes) that cover wild Peruvian tomato plants – and how they might impact insects in different ways. That, in turn, could lead to developing additional lines of tomatoes with targeted resistance to specific pests, which would substantially reduce pesticide usage and tomato production costs. She previously used acylsugars to develop new tomato varieties that deter insects, with added virus protection. The grant will allow her to produce germplasms, which could then be used by other breeders to create commercial or regionally adapted breeds, as well as webinars to help disseminate the findings and train others.

In addition, a $450,000 AFRI grant will allow Michael Mazourek , the Calvin Noyes Keeney Assistant Professor of Plant Breeding, to create varieties of squash with high levels of carotenoids and carbohydrates. Using transcriptome sequencing, metabolite analysis and a unique barcoding and phenotyping system developed in his lab, Mazourek will determine the genetic basis of variation in fruit quality of three types of squash and a pumpkin. Genomic selection will be tested in one of his most promising breeding populations, derived from a cross between honeynut, a high-quality mini butternut, and gugle, a butternut with good disease resistance and storage ability. Mazourek also plans to share his results and his novel data collection system with breeders worldwide through the online extension program.