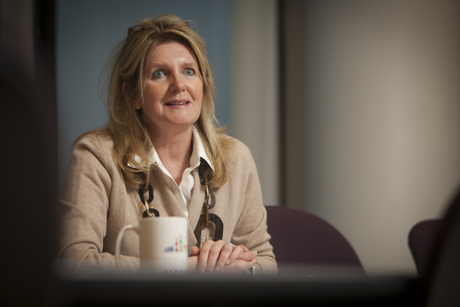 There are few better words than “bittersweet” to describe the feeling of leaving a place one loves for new adventures.

The word represents the sentiments of Professor Robin Davisson, as she and her husband, President David Skorton, announced March 10 they will be leaving Cornell for Washington, D.C., after June 30, 2015. At that time, Skorton will become secretary of the Smithsonian Institution.

Davisson, the Andrew D. White Professor of Molecular Physiology with laboratories on Cornell’s Ithaca campus and at Weill Cornell Medical College in Manhattan, will stay involved at Cornell to complete projects at her Ithaca lab for some months after she and Skorton relocate to Washington, but she then plans to explore new opportunities outside of laboratory research.

As a scientist she has garnered numerous awards and accomplishments. She is a fellow of the American Association for the Advancement of Science and a recipient of the 2012 Arthur C. Corcoran Memorial Award and Lecture from the American Heart Association, one of the most prestigious prizes in her field, among other honors.

“At this point in my career, I’ve decided to make a change and pursue other endeavors, still using all that I’ve learned from these 25 years in science,” said Davisson, who has appointments in the Department of Biomedical Sciences in the College of Veterinary Medicine and the Department of Cell and Developmental Biology at Weill Cornell. She said she plans to use her understanding of science and “bring that skillset and knowledge base to another endeavor that will be likely in the public interest, including nonprofit or policy activities. But exactly what that is, right now, I’ve just begun to explore.”

She said she is interested in global policy issues related to obesity, a subject she has tackled as a scientist, studying the role of the brain in links between obesity and high blood pressure. Davisson, who is a “pescovegetarian” – meaning other than eating fish, she is a vegetarian – also has had a longstanding passion for local foods, nutrition, healthy living, exercise and meditation.

For Davisson, the highlights of her time at Cornell revolve around faculty, staff and students. She said she has been “blessed to have such terrific teams” in her labs, and she has benefited from the “great minds” of her colleagues. “We are doing work that is very different than what I did when I came from Iowa,” she said of her move from the University of Iowa in 2006, when Skorton became Cornell’s 12th president.

“The questions and the strategies have really evolved as a result of my interactions with my colleagues here,” she added. For example, in her work on preeclampsia – sudden high blood pressure late in pregnancy – “we are [now] looking at a time very early in pregnancy, around implantation, long before the disease develops, and that’s in part a result of having a wonderful set of colleagues here in the [veterinary] college who are focused on reproductive biology,” she said.

Another highlight has been her work to broaden the scope of graduate education. She has played a major role in developing the Graduate Research and Teaching Fellowship Program to train graduate students to become more effective teachers, and she has served as director of graduate studies in the field of molecular and integrative physiology.

“The other thing that will live on in my memory are the wonderful” interactions she and Skorton have had with students, including weeklong stints as residents of Mary Donlon Hall, a freshman residence hall. Davisson is a founding member of a group at Becker House that knits items for people in need and collaborates with a knitting group of inmates at Auburn State Prison, whom they visit once a month.

A devoted, lifelong reader and traveler, Davisson has always had an appreciation for the humanities, something she shares with Skorton. They host literary lunches at their home, bringing in noted authors for readings that are open to the community. Davisson said she cherishes her work in the community, particularly at the Sciencenter of Ithaca, where she currently serves as chair of the board.

Davisson credits her ability to juggle two labs, many professional obligations and be an accessible Cornell ambassador to the “tremendous help” she gets from her assistant, Lorraine Capogrossi, and her lab manager, Scott Butler, among others. But life as a researcher and as a Cornell ambassador complement each other, she said, when she shares her knowledge as a faculty member with alumni and parents.

Her advice to the spouse of the next president of Cornell, man or woman? “I would say, become as engaged as you possibly can with the many great things that are [happening] on this campus and in this community … and remember to enjoy it,” she said.

Skorton sets priorities for next 15 months