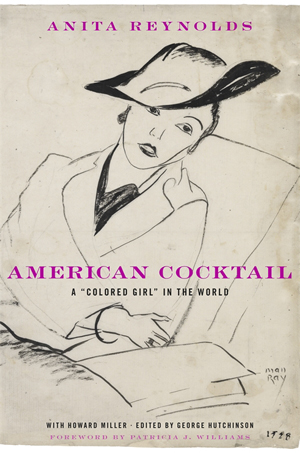 Anita Thompson Dickinson Reynolds was many things – a free-spirited silent-film actress, dancer and writer; a social butterfly who traversed bohemian and ‘respectable’ society with ease through the 1920s and ’30s on three continents before settling down to a career as a psychologist.

She knew Charlie Chaplin, Pablo Picasso, Coco Chanel, W.E.B. Dubois, and several other artists and writers, from F. Scott Fitzgerald to denizens of Greenwich Village and the Left Bank.

George Hutchinson, a professor in the Department of English at Cornell, discovered Reynolds' unpublished memoir in a library archive and edited the resulting book, “American Cocktail: A ‘Colored Girl’ in the World,” recently published by Harvard University Press. Hutchinson also provides detailed biographical and cultural information in his chapter notations.

Born in 1901, Reynolds grew up in Chicago and Los Angeles; her extended family included cousin Langston Hughes. An African-American of multiracial heritage who could pass for Native American, Creole or Mexican, she studied dance and appeared in films with Rudolph Valentino.

As an émigré in Paris, she became acquainted with Picasso, Henri Matisse, Man Ray and Antonin Artaud. She also traveled in North Africa and spent time in New York among writers and artists of the Harlem Renaissance. She was a journalist in Barcelona during the Spanish Civil War and later served as a Red Cross nurse in Paris, before fleeing to Lisbon, Portugal, as the Nazi occupation began. Throughout her life, she was her own person, and wrote her story just as frankly, Hutchinson said.

“I was fascinated by the way she threaded together all these different worlds, with this total nonchalance,” he said in an interview with The New York Times. “I had never read anything like it.”

Reynolds died in 1980. Hutchinson found the memoir among her papers in the Howard University archives while he was researching another literary figure of the ’20s, Nella Larsen.

His 2006 book “In Search of Nella Larsen: A Biography of the Color Line” (Harvard University Press) won Phi Beta Kappa’s Christian Gauss Award. Larsen (1891-1964) achieved relatively minor fame as a writer during the Harlem Renaissance. Long forgotten and rediscovered in the 1970s, she has come to be considered one of the best black novelists of her generation.

Hutchinson is the Newton C. Farr Professor of American Culture at Cornell; his research and teaching focuses on 19th- and 20th-century American literature. His other books include “The Harlem Renaissance in Black and White” (1995).