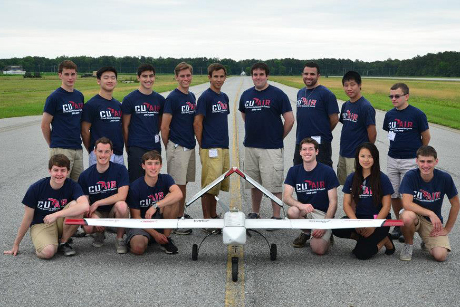 CUAir
The CUAir team with their aircraft, Helios, at the competition.

Cornell, which won the event last year, swapped places with last year’s runner-up, North Carolina State University. This was the third consecutive year Cornell’s team won best flight/mission, good for half of the overall score. The team also placed fourth in the technical journal paper and eighth in the flight readiness review components of the competition, each worth 25 percent.

“This type of success can never be considered routine, but it can always be assured when we have students like this who are dedicated to the tasks at hand and have the skills to carry them out,” said team adviser Thomas Avedisian, professor of mechanical and aerospace engineering.

The competition initially had 48 teams signed up from all parts of the world; 28 teams actually flew in the competition. Delhi Technological University (India), Kansas State University, and the Technion – Israel Institute of Technology placed third, fourth and fifth, respectively. A total of $51,750 was awarded to the 33 schools that competed.

This year’s concept? The U.S. Forest Service requests intelligence, surveillance and reconnaissance through an unmanned aerial system to perform a search-and-rescue mission after a huge forest fire in Idaho has spread to 100,000 acres. Challenges included detecting infrared signatures, a communications relay challenge, and an egg drop, in which they tried to drop a plastic egg near a target.

“The egg drop task was a fun addition to the mission this year because it was right next to all the spectators so you could actually see the egg fall as the planes flew by,” said team leader Joel Heck ’14. “We dropped our egg autonomously, meaning we armed the computer and the computer determined when to release the egg based on the plane’s GPS position and speed. It ended up 94 feet away from the target center, which was within the required 100-foot radius, so it did as well as we could have expected.”

The team avoided at least two potential disasters. The foam tires of its aircraft, Helios, while ideal for the team’s grass practice runway in Ithaca, had settled on the pavement to such an extent that they were no longer round at the time of Cornell’s official flight. Takeoff was extremely bumpy, but the plane got off the ground without serious mishap.

Then the team had to deal with a randomly assigned communications channel that did not work well with their electronics system, requiring them to scramble to process the transmitted data.

“Yet the team still performed beautifully to contend with this situation – a talented bunch of students to say the least,” Avedisian said. “It just worked out that way, and the team had to deal with it, which it did.”

Robert Emro is assistant director of marketing and communications for the College of Engineering.