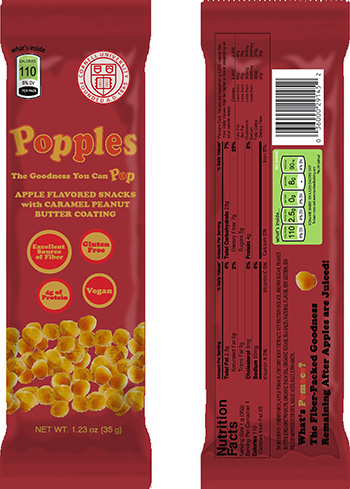 Provided
The packaging for Popples, an apple-flavored treat with a caramel and peanut butter coating created by Cornell food science students.

It’s goodness you can pop!

The IFT convention, one of the country’s largest annual scientific conventions, typically attracts more than 20,000 people. Cornell has won the competition three years in a row with Popples, Squashetti (2013) and DoughTEMPtations (2012).

Using pomace, the leftover apple fiber from the juicing process at the Cornell Orchards, the students created the snack that provides an excellent source of fiber and protein, and contains natural apple nutrients in a ready-to-go format.

Several other Cornell groups and individuals earned top honors throughout the convention.

“The college is very proud of our student performance at the 2014 IFT annual meeting,” said Kathryn Boor, the Ronald P. Lynch Dean of the College of Agriculture and Life Sciences and a professor of food science. “In no small measure does the quality of our students contribute to the Cornell food science program’s status as the top program of its kind in the U.S. The performance of our students at this year’s competition highlights not only their dedication to their studies, but also that they are well-prepared for terrific careers upon graduation.”

In other IFT results:

Undergraduate Research Competition: Robert Divine ’14 placed second for “Isolation of Bacteria From Compost for Potential Use in Biodecaffeination,” and Clint Hervert ’14 placed third for  “Characterization of Toxin Genes Among Bacillus Cereus Group Isolates.”

Tushar Gulati won first place for his paper, “Transport and Deformation During Hot Air Puffing of Rice Kernels” in the American Association of Food Scientists for the Indian Subcontinent Division competition.