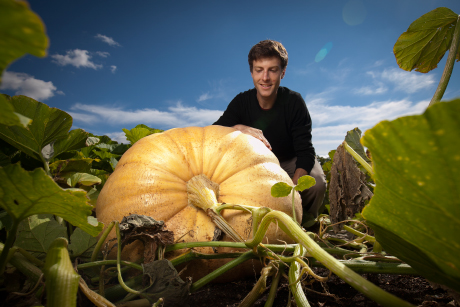 Relay teams hope to squash their competition at the first Big Red Pumpkin Regatta on Beebe Lake Saturday, Oct. 4. Hosted by Cornell Flotilla, a graduate student club, racers will decorate their giant pumpkins at noon, while the paddling starts at 2 p.m.

The racers must be out of their gourd – or, actually, the racers must stay in them. Five teams each with four people will have enough room in a 300-pound pumpkin to fit a single paddler. In a relay, the paddlers will race 100 meters four times around Beebe Lake. The grand prize: bragging rights.

Since the spring, Peter DelNero, a graduate student in the field of biomedical engineering, and his club colleagues, have been lovingly cultivating giant pumpkins (Cucurbita maxima) on several acres of the Dilmun Hill student organic farm. “I can’t wait to get out into the pumpkin boats. It’s going to be a riot,” says DelNero.

For team registration and general information about the event, go to the Facebook page: Cornell Flotilla.

The pumpkins called Giant Atlantics can grow up to 800 pounds under normal conditions, while some genetic titans can grow up to 2,000 pounds. In many cases, these gargantuan gourds resemble “Star Wars” character Jabba the Hutt, while others are shaped like classic canoes.

The course consists of a 100-meter circuit starting and ending at Beebe Beach. Each team will complete four laps (one lap per person) in a giant pumpkin boat. Two trained Cornell Outdoor Education paddling instructors will monitor the course in canoes and provide rescue for any capsized pumpkins. Each participant will be required to wear a life vest.

Many regional pumpkin regattas flourish throughout the United States. Here, the New York State Giant Pumpkins Growers Association thrives. Cornell Flotilla hopes to make the pumpkin regatta an annual event. Said DelNero: “As we begin our first season in the sport of giant pumpkins, we want to establish this excellent adventure as an enduring Cornell tradition.”