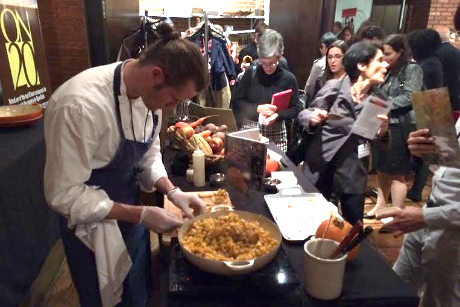 Cornell’s regional sesquicentennial celebrations continued Oct. 22 at “Furrows to Boroughs: A Taste of New York State in New York City.” Hosted by the College of Agriculture and Life Sciences at Astor Center in Manhattan, the event highlighted the link between tri-state agriculture and Cornell. The culinary work and products of local farmers, agricultural businesses and chefs were on display and available to taste.

Chefs with Big Red ties at the event included Jeffrey Lizotte ’04 of ON20, who was serving a root vegetable ratatouille on brioche; Joe Dobias ’01 of Joe & Misses Doe; and Savinien Caracostea ’09. Jordan Andino ’10, who has appeared on cooking television shows “Beat Bobby Flay” and “Chopped,” mentioned plans to open his own restaurant in December before demonstrating healthy cooking techniques to the crowd.

Gayle Reichler ’86, founder of Gayle’s Miracles, a health-minded chocolate truffle company, discussed the connection between her agribusiness education at Cornell, post-college nutrition studies and starting her own company. “I put all of my skills together essentially,” she said while handing out samples. “I wanted to create something healthy, because everyone kept saying there’s nothing healthy that tastes good.”

Jason A. Grizzanti ’00, co-owner of Warwick Valley Winery & Distillery, poured tastes of his bourbon, gin and cider products. “Everything we use is New York grown,” he said – everything from the apples, many of which come from Red Jacket Orchards in Geneva, run by Brian Nicholson ’94, to a grain used to make his bourbon, which comes from Lakeview Organic Grain, co-owned by Mary-Howell Martens, M.S. ’82. “People often think you can only make bourbon in Kentucky because that’s where it originated, but you can make bourbon in any state in the nation,” Grizzanti explained.

In the next room, staff from Vertical Water was discussing its signature product, maple water. The company developed the technology to preserve maple sap in conjunction with Michael Farrell, director of Cornell’s Sugar Maple Research & Extension Field Station in Lake Placid, New York, which allowed Vertical Water to commercialize the product.

The event drew a large crowd of alumni from across the various colleges and years. “For me it’s important to be able to continue to connect with people I saw in college and to meet new people,” said Kyle Scott ’11. “The Cornell network is strong, especially here in New York City, and an event like this underscores that strength.”

“This is my first CALS event, so I’m excited,” said Katie Bartels ’06, surveying the room. “When I find out something was made by a Cornellian I’m like, ’I’m only eating this product!’”

Kristen Tauer ’10 is an editor in New York City.