In his final State of the University Address to the annual meeting of the Cornell Board of Trustees and University Council, President David Skorton outlined some high points of Cornell’s continuing excellence and its challenges going forward.

“Without a doubt, my years at this unique university … have been the high point of a long career in higher education, and I am very grateful – I’m thrilled – to be able to complete my service during Cornell’s sesquicentennial,” Skorton said Oct. 17 in Statler Auditorium. “There is, to my knowledge, no other university in the broad sweep of American higher education that combines Cornell’s distinctive features in such a productive way.”

He highlighted three broad areas in which Cornell leads “and where we have an opportunity to do even more on our own campus and for the general good”: 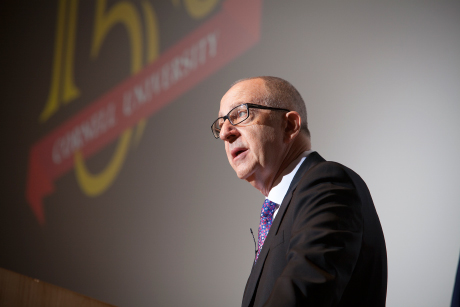 Lindsay France/University Photography
President David Skorton delivers his last State of the University Address to the annual meeting of the Board of Trustees and University Council Oct. 17 in Statler Auditorium.

“I see Cornell playing a continuing and significant role in several other critical areas,” he said, including “ameliorating social inequalities that hold back human progress,” creating new partnerships with industry and government, “realizing the potential for personalized medicine at Weill Cornell Medical College” and making Cornell a more international university.

Skorton also outlined some challenges Cornell faces, including keeping tuition affordable by controlling operating costs; demonstrating the value of higher education and advocating for the importance of a broad liberal arts education; assessing effective uses of educational technology; faculty-directed post-tenure review; and hiring excellent faculty and staff from a broad and diverse pool “in keeping with the founding vision of Cornell and the needs of a globalized world.”

This is “an ambitious agenda,” he said, but “I know we can continue to contribute to societal progress and individual success.”

Skorton announced a new fundraising goal of $5.75 billion for the “Cornell Now” campaign’s official end in December 2015, promising the campaign would “blow past that, and we’re going to do it sooner.”

“I will do all I can to advance us toward this ambitious new goal during my remaining time at Cornell, and I have no doubt that Elizabeth Garrett, who will become Cornell’s 13th president on July 1, is superbly equipped to move us forward in this and in so many other ways.”

Although he and Robin Davisson are moving to Washington next July, he said in conclusion that “a big part of us will always be on this campus and with all of you. Thank you for a wonderful run.”

Board of Trustees Chairman Robert Harrison ’76 introduced Skorton. “It’s hard to overstate how perfect a fit David has been for the university,” he said, and listed a few qualities: “He’s accessible; he is the first president to give his email address to everybody. … He’s a learner; he delivered a commencement speech in Arabic at Weill Cornell in Qatar,” participated in his first triathlon while president, and “learned beekeeping with Robin, and is still alive.”

Skorton also “in his eight and a half years had more than 10,000 requests for his time” and “held the record for most-liked image on Cornell’s Instagram” – a selfie with actor Ed Helms at senior convocation last spring.