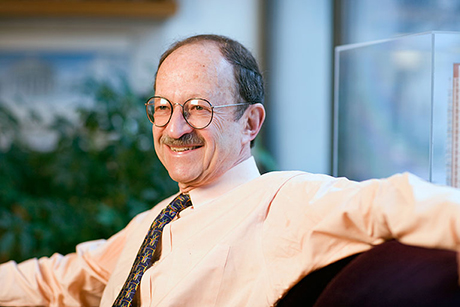 Matthew Septimus/Memorial Sloan-Kettering Cancer Center
Dr. Harold Varmus, director of the National Cancer Institute at the National Institutes of Health and internationally recognized for his research on retroviruses and the genetic basis of cancer, will be the Lewis Thomas University Professor of Medicine at Weill Cornell.

Dr. Harold Varmus, director of the National Cancer Institute at the National Institutes of Health and co-winner of the Nobel Prize, will join Weill Cornell Medical College’s faculty as the Lewis Thomas University Professor of Medicine, effective April 1. In conjunction with his appointment at Weill Cornell, Varmus, internationally recognized for his research on retroviruses and the genetic basis of cancer, will team up with the New York Genome Center (NYGC) as a senior associate core member to promote the use of cancer genomics throughout the New York region.

In his new position at Weill Cornell, Varmus will continue to conduct research on fundamental aspects of cancer, in collaboration with investigators at the Sandra and Edward Meyer Cancer Center, led by Meyer Director Lewis C. Cantley. By working with the NYGC, Varmus will strive to amplify work on cancer genomes and its application to cancer care through its consortium of member institutions.

“This is a remarkable time in cancer research,” Varmus said. “Technological advances have enabled scientists to conduct comprehensive genomic studies that are revealing detailed portraits of cancer cells, sparking new opportunities to develop next-generation therapies, diagnostics and prevention strategies. I’m excited to join Weill Cornell Medical College and the New York Genome Center as we strive to reduce the burden of cancer and enhance human health in New York and around the world.”

Varmus also will serve as a senior adviser to Dr. Laurie H. Glimcher, the Stephen and Suzanne Weiss Dean of Weill Cornell and provost for medical affairs for Cornell University, and will have an appointment in the Weill Cornell Graduate School of Medical Sciences.

“As one of the world’s leading cancer geneticists, Dr. Varmus, a physician, has dedicated his career to driving excellence in cancer research by investigating the underlying mechanisms that cause these diseases,” Glimcher said. “We are delighted and honored that Dr. Varmus, an esteemed leader, scientific pioneer and champion of cancer research, will continue this distinguished and vital work at Weill Cornell, catalyzing groundbreaking discoveries into improved patient care.”

Varmus’ laboratory, which will be housed in the Belfer Research Building, will continue to focus on lung adenocarcinoma and the cancer-driving mutations found in that disease. Those mutations affect cell signaling, cell growth and processing of RNA. In his seminal work, conducted during 23 years as a faculty member at the University of California San Francisco Medical School, Varmus, his collaborator Dr. J. Michael Bishop and their colleagues demonstrated the cellular origin of the oncogene of a chicken retrovirus. Their discovery led to the isolation of many cellular genes that normally control growth and development and are frequently mutated in human cancer. Varmus and Bishop were awarded the 1989 Nobel Prize for physiology or medicine and numerous other accolades for this discovery. Varmus is also renowned for his studies on the replication cycles of retroviruses and hepatitis B viruses, the functions of genes implicated in cancer and the development of mouse models of human cancer.

At the National Cancer Institute, Varmus initiated a reorganization of its clinical trial activities and promoted the use of precision medicine, harnessing each tumor’s genetic profile to individualize treatment. He also helped to guide The Cancer Genome Atlas, an NCI and National Human Genome Research Institute-supported program that has identified genomic changes in more than 20 different types of human cancer, and established new Centers for Global Health and Cancer Genomics.

Varmus is a member of the National Academy of Sciences and the Institute of Medicine, and is involved with several initiatives to promote science and health in developing countries. He is the author of more than 350 scientific papers and five books, including the 2009 memoir “The Art and Politics of Science.”

Alyssa Sunkin-Strube is an editor at Weill Cornell Medical College.