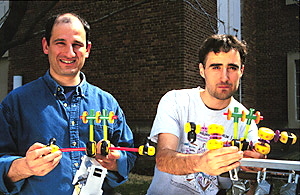 It doesn't have a brain or a heart, and its walk is a little like the scarecrow's, but a little headless, armless, trunkless two-legged robot, developed at Cornell University, can walk, wobble, hobble, limp, stride and stagger. But it can't stand still in any position without falling over.

The fact that this robot, made of plastic Tinkertoy parts and a few odds and ends, is stable in motion is giving mechanical engineers here new thoughts about how humans walk.

Michael J. Coleman, a lecturer in mechanical engineering at Cornell, says the little walker, by using gravity on a gentle slope "performs repeatable, chattering, human-like stable steps without falling over." Says Coleman, who earned his doctorate in February, "We believe this is the first two-legged, statically unstable 3-D passive-dynamic walker that can walk stably down a slope without any control system whatsoever."

With help from Andy Ruina, director of the Human Power, Biomechanics and Robotics Laboratory at Cornell, Coleman stumbled on the walker's design while preparing for his doctoral defense. "In fact, it is one of the few devices of any kind that is dynamically stable near a statically unstable configuration and doesn't have fast spinning parts," says Ruina.

"Playing, with no hopes of success, we placed the toy on a ramp. Surprisingly, it took a few serendipitous, if not very steady or stable steps. After some nonquantifiable tinkering, we arrived at the functioning device," Coleman and Ruina write in the April 6 issue of Physical Review Letters, in which they describe their contraption. Their work also was presented recently at a conference in Germany on the mechanics of walking.

"How humans walk with their top-heavy, upright trunk atop two relatively spindly legs is not well understood," explains Coleman in Ruina's third-floor lab where robot legs and dismembered bike wheels chains and spare parts dangle from the ceiling and are strewn about the room.

"While some scientists believe that our nervous system largely coordinates balance and locomotion, our research further suggests that the passive interaction of gravity, inertia and ground contact may also be very important in coordinating our locomotion," says Coleman.

Coleman and Ruina's work builds on the pioneering analytical research by Tad McGeer, formerly of Simon Fraser University in Vancouver, B.C., now at the Insitu Group in Underwood, Wash., who argued that human stability and balance were likely governed by the laws of mechanics and not necessarily driven primarily by the brain. McGeer developed various stable 2-D walkers but could only find unstable 3-D walking motions.

Coleman and Ruina believe their work, which McGeer likened to the development of airplanes from motorless gliders, will help provide key insights into the mechanics of walking. It could also have important implications for designing better powered and controlled biped robots, building better artificial legs and improving rehabilitation for neuromuscular problems. The researchers hope to make the device more stable and sophisticated.

Coleman constructed the Tinkertoy device as follows: He stuck two green rod legs, bottomed with rounded yellow feet, into a red crossbar hip, along with several orange washers and green hinges. To stabilize the toy, he added low-lying red and yellow outriggers weighed down with steel nuts off each foot to lower the centers of mass. Ruina helped fine-tune the toy by rounding out the flat spots of the Tinkertoy wheels with flexible brass strips. Soon, the hand-sized gadget was tottering down a gentle slope, tilting from side to side but steadily walking on and on and on. But, it couldn't stand still.

Coleman and Ruina's mathematical models and computer simulations did not predict the success of the walker, and their computer models are still too simple to explain it. "It does, however, highlight the possibility that uncontrolled dynamics may not just contribute to fore and aft balance in walking but also to side-to-side balance," said Ruina, an associate professor of theoretical and applied mechanics, who is also interested in the energetics of rowing, biking, walking, brachiating and motion in general. Graduate student Mariano Garcia, along with Coleman,currently is exploring more complicated models to attempt to explain the observed motions of the Tinkertoy walker.

Cornell undergraduates were also involved in related research projects, including Jacqui Rodrick, who wrote some 2-D straight-legged walking simulations; John Camp and Maria Hagan, who developed methods to accurately measure walker parameters; and Mario Gomes, who made simulations of 2-D walking on the knees.

Coleman and Ruina, whose work was supported in part by the Whitaker Foundation, also credit the work of former graduate student Anindya Chatterjee. Garcia's work has been supported in part by a National Science Foundation Fellowship. For Quicktime videos and various publications, see http://www.msc.cornell.edu/~ruinalab. The quicktime videos of the Tinkertoy walker are found near the end of the page.