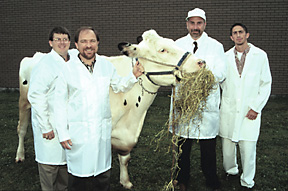 A simple change in cattle diets in the days before slaughter may reduce the risk of Escherichia coli (E. coli) infections in humans, U.S. Department of Agriculture (USDA) and Cornell University microbiologists have discovered.

Research reported in the Sept. 11 issue of the journal Science indicates that grain-based cattle diets promote the growth of E. coli that can survive the acidity of the human stomach and cause intestinal illness. E. coli contamination is responsible for more than 20,000 infections and 200 deaths each year in the United States.

Fortunately there is a workable solution to the food-safety problem, the scientists say. By feeding hay to cattle for about five days before slaughter, the number of acid-resistant E. coli can be dramatically reduced.

"Most bacteria are killed by the acid of stomach juice, but E. coli from grain-fed cattle are resistant to strong acids," explains James B. Russell, a USDA microbiologist and faculty member of the Cornell Section of Microbiology. "When people eat foods contaminated with acid-resistant E. coli -- including pathogenic strains like O157:H7 -- the chance of getting sick increases."

E. coli is a normal bacterium in the gastrointestinal tract of animals and humans, and most types are not harmful (See "E. coli and Cattle" fact sheet, attached). However, disease-causing strains such as E. coli O157:H7 produce toxins that cause bloody diarrhea or even kidney failure in humans. Mature cattle are unaffected by E. coli O157:H7. Only a small number of cattle (estimated at 1 to 2 percent at any one time) shed E. coli O157:H7 in their feces, a rate that is not fully explained.

When beef carcasses are accidentally contaminated by feces at slaughter, the pathogens can enter the human food supply. E. coli O157:H7 can be killed by cooking or irradiation, but the bacterium continues to pose a food-safety risk.

Cattle are fed starch-containing grains to increase growth rate and produce tender meat. Because the bovine gastrointestinal tract digests starch poorly, Russell explains, some undigested grain reaches the colon, where it is fermented. When the grain ferments -- and acetic, propionic and butyric acids accumulate in the animal's colon -- a large fraction of E. coli produced are the acid-resistant type.

"Grain does not specifically promote the growth of E. coli O157:H7, but it increases the chance that at least some E. coli could pass through the gastric stomach of humans," Russell says. "The carbohydrates of hay are not so easily fermented, and hay does not promote either the growth or acid resistance of E. coli. When we switched cattle from grain-based diets to hay for only five days, acid-resistant E. coli could no longer be detected."

In studies performed at Cornell, beef cattle fed grain-based rations typical of commercial feedlots had 1 million acid-resistant E. coli, per gram of feces, and dairy cattle fed only 60 percent grain also had high numbers of acid-resistant bacteria. In each case, the high counts could be explained by grain fermentation in the intestines.

By comparison, cattle fed hay or grass had only acid-sensitive E. coli, and these bacteria were destroyed by an "acid shock" that mimicked the human stomach, the microbiologists report in Science.

According to microbiologist Russell, acid-resistant strains of bacteria have evolved to overcome the protective barrier of the gastric stomach. The ongoing process of natural selection allows organisms with the appropriate genes to survive and multiply where others cannot. Because cattle have been fed high-grain, growth-promoting diets for more than 40 years, he says, there has been ample opportunity to select acid-resistant forms.

Further research is needed to identify the acid-resistance genes of E. coli, but Russell says that "common laboratory strains" of E. coli appear to lack the necessary DNA to survive acidic gastrointestinal environments.

"In the meantime, now that we know where the acid-resistant E. coli are coming from, we can control them with a relatively inexpensive change in diet," Russell says. "This strategy has the potential to control the production of other acid-resistant bacteria, including virulent strains of E. coli that have not yet evolved."

A brief period of hay-feeding immediately before slaughter "should not affect either carcass size or meat quality," and the diet change could be implemented with minimal expense and inconvenience to feedlot operators, according to Donald H. Beermann, Cornell professor of animal science.

USDA microbiologist Russell has been stationed in Ithaca for more than 17 years and is affiliated with the U.S. Dairy Forage Research Center in Madison, Wisc. He holds the rank of adjunct professor of microbiology at Cornell, and the other authors of the Science report were his students when the feeding studies were conducted: Francisco Diez-Gonzalez, currently a postdoctoral fellow, completed his Ph.D. in food science at Cornell in 1996. Todd Callaway is a Ph.D. candidate in microbiology. Menas Kizoulis, a Cornell senior in biological sciences, was recently awarded a Howard Hughes Undergraduate Fellowship to continue research in Russell's laboratory.

The studies were supported by the Agricultural Research Service of the USDA.

TRILLIONS AND TRILLIONS: The gastrointestinal tract of animals and man is an ideal habitat for the growth of bacteria, and cell densities can be as high as a trillion cells per gram of digesta. Most gut bacteria are harmless types, and they can even provide essential nutrients to the host. When animals consume contaminated food, the native bacteria compete with the invaders and provide at least some protection against food-borne illness. Escherichia coli is a common bacterium in the GI tract, but it is usually outnumbered by other types. E. coli is never a beneficial bacterium, but under normal circumstances the animal and E. coli tolerate each other. Some strains of E. coli, however, are not people-friendly, and these highly virulent forms can cause acute illness or even death.

THE GOOD, THE BAD AND THE ENTEROHEMORRHAGIC: E. coli is a normal inhabitant of the human gastrointestinal tract, but strains identified as O157:H7 are enterohemorrhagic and cause intestinal bleeding. Victims may experience severe cramping and abdominal pain, watery or bloody diarrhea, vomiting or low-grade fever for an average of eight days. E. coli O157:H7 also produces "shiga-like" toxins that can cause kidney failure; once the infection reaches the uremic phase, the death rate can be as high as 30 percent. As few as 10 viable E. coli O157:H7 can cause infection.

THE FECAL CONNECTION: Mature cattle are unaffected by E. coli O157:H7, and a small percentage of the cattle in the United States are carriers. When meat is contaminated with cattle feces at slaughter or fruit and vegetables are fertilized with manure, E. coli O157:H7 can enter the human food supply. In day-care facilities and nursing homes, fecal contamination is the vehicle for person-to-person infection. Recent work indicates that swimming pools and water parks can be contaminated with E. coli O157:H7.

RAW DANGER: Heat, in the pasteurization of milk and fruit juices or the cooking of solid foods, will destroy E. coli bacteria. E. coli on the outer surfaces of a steak or chop are easily destroyed by heat of cooking. But E. coli in ground meat may be concealed deep within the hamburger. Hamburgers having any "pink meat" can still have live E. coli O157:H7 cells.

GASTRIC BARRIER: Humans have a natural barrier that kills food-borne bacteria -- the acidic, gastric juices of the stomach -- but E. coli bacteria can withstand "acid shock" if they have grown in the presence of fermentation acids. Fermentation acids increase when cattle are fed large amounts of grain. Cattle fed grain have very large numbers of acid-resistant E. coli. The E. coli of hay-fed cattle are acid-sensitive and are easily killed by gastric juice.

ACID RELIEF: Research indicates that cattle fed hay have 1 million-fold fewer acid-resistant E. coli than cattle fed grain. However it may be possible to process grains to decrease acid production and acid resistance. When grains are heat-treated or steam-flaked, less starch passes to the colon, and fermentation acids decline.