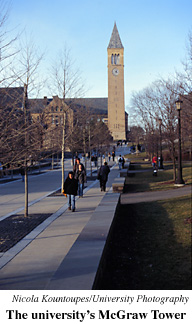 As Valentine's Day beckons Cornell lovers, there's an emptiness in the frigid air: the chimes in McGraw Tower will fail to ring for only the second Feb. 14 in Cornell's history (the first was last year).

Yet in the snow-muffled quiet, there rings a reminder of a romance past -- that of heiress Jennie McGraw, the chimes' first donor, and her scholarly though modest-of-means suitor and then husband, Cornell's first librarian, Willard Fiske. Their relationship, for those unfamiliar with the story, was quickly extinguished by McGraw's untimely death, but it ignited a drawn-out lawsuit that embattled the university and such Cornell principals as Henry Sage, Andrew Dickson White and Fiske over McGraw's will. At stake was some $2 million, more than $120 million in today's dollars.

It all began sweetly enough, said Peggy Haine '65, associate director of Communication Strategies at Cornell, to a recent Cornell Women's Club group during her talk on the "Romance of the Cornell Chimes." Jennie was the only child of a wealthy lumber baron from Dryden, John McGraw, who had funded McGraw Hall, the university's first building. When Jennie asked White, Cornell co-founder and its first president, what might be a nice gift from her to the soon-to-open university, he suggested chimes. So, in 1868, she gave the university a nine-bell chime set -- which became the first to peal over any American campus.

In 1877 Jennie, 37 and still unmarried, inherited her father's vast fortune and became, what Haine quipped, "a hot property."

Though stricken with tuberculosis, Jennie soon sailed off to Europe to purchase furnishings for the mansion she was building. (This ill-fated building was bought and occupied by the fraternity Chi Psi, but it burned to the ground in 1906, killing four fraternity brothers and three firemen.) Soon after her departure, bachelor Fiske -- professor of north European languages, librarian, director of the University Press, unofficial director of public information and a boyhood friend of White's -- took a leave of absence to go to Europe as well.

With loans from White, Fiske at age 48 made his way to Rome in April 1880 to join Jennie, then age 40 -- an "invalid with her doom evident," wrote Morris Bishop in his seminal history of the university. Engaged in May and married in July, the couple honeymooned on a barge from Cairo, floating up the Nile with a crew of 17.

Less than a year later, though, the newlyweds learned that Jennie was dying. Her last wish, Bishop wrote, was to die in Ithaca. The couple returned from Europe in early September 1881, and Jennie died several weeks later.

What followed was a complex tale, which the press followed closely, of the university at odds with Fiske over Jennie McGraw's estate. Said Haine: "The fight was brutal as well as being a public relations nightmare for the university. And public relations hadn't yet been invented, but its invention was not far-off, and, of course, it was up to a Cornellian to invent it!"

More than seven years later, the U.S. Supreme Court ruled in Fiske's favor. Henry Sage, John McGraw's business partner and a major Cornell funder, was furious that Fiske got the money that he believed Jennie had intended for the university. Sage funded and endowed the University Library, which he said McGraw's endowment was originally slated for, and lovingly built the tower to hold Jennie's chimes. But he vented his anger for posterity in the bronze plaque at the library's entrance, which undergraduates have wondered about for more than 100 years. (See box.)

Henry Sage vented his anger over the Edward Fiske and Jennie McGraw romance and McGraw will controversy in the bronze plaque at the base of McGraw Tower, which reads:

The good she tried to do shall stand as if 'twere done
GOD finishes the work by noble souls begun.
In loving memory of JENNIE MCGRAW FISKE whose purpose to
found a great library for Cornell University has been defeated
this house is built and endowed by her friend
HENRY W. SAGE.

In the end, however, the university got it all anyway, as a bequest from Fiske, who died in 1904.

But back to the chimes: The bells (now 19 of them) are silent because they're in Batavia, Ohio, being tuned. The bell tuner must shave brass off the inside of each bell until the proper tone rings forth. The chimes will be back, with the addition of two newly cast bells, in time for Commencement 1999 and Alumni Weekend, when the full set of 21 tuned bells will be played from a temporary playing stand on the lawn near Sage Chapel -- a platform very similar to the original stand the bells were played on the day the university opened in 1868. The bells will be back in the tower, in full operation, by the fall semester.

In the meantime, Cornellians can take comfort in the accuracy of the tower's timepieces as well: The clocks are run by the Global Position System (GPS), the state-of-the-art navigation system. Each day they are reset to the second by satellite communication, and soon the hour bells will be as well.

So, although lovers may not be able to kiss to the chimes playing "The Jennie McGraw Rag" this Valentine's Day, they can note the exact time of their bliss and set their watches to it.