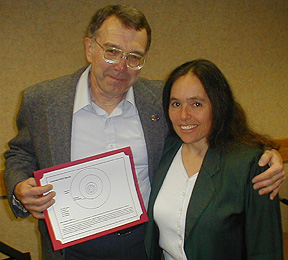 Cornell News Service
Joseph Ververka, Cornell professor of astronomy and leader of NEAR imaging team, congratulates Ann Harch after she learned that an asteroid had been named for her.

A Cornell University astronomer who helped save a $150 million space mission last December was rewarded at a surprise party this afternoon with a truly heavenly gift: A minor planet named in her honor.

The International Astronomical Union (IAU), the world's authority on celestial nomenclature, announced that minor planet 4896 P-L now will be known as Asteroid 9251 Harch. It is named for Ann P. Harch, a research specialist at Cornell's Center for Radiophysics and Space Research, whose efforts helped save the Near Earth Asteroid Rendezvous (NEAR) spacecraft mission.

"You guys are bad! You guys are bad!" said Harch after she was told the news at the party at Cornell's Space Sciences Building. "I've worked really hard on those asteroid fly bys. It's really nice when your colleagues recognize you."

The NEAR spacecraft seemed to be doomed after contact was lost Dec. 20, just days prior to its flyby of the asteroid 433 Eros, about 240 million miles from Earth. But after contact was renewed, scientists quickly formulated a new mission plan, largely due to Harch's ingenuity, as well as that of researchers at Cornell, NASA's Jet Propulsion Laboratory (JPL) in Pasadena, Calif., and Johns Hopkins University's Applied Physics Laboratory (APL) in Laurel, Md. As a result, signals were sent in the nick of time, enabling the spacecraft to capture images as it approached Eros.

Donald Yeomans, an astronomer with the JPL, nominated Harch for her expertise in designing spacecraft camera sequencing and pointing commands -- giving researchers the ability to take pictures of asteroids during spacecraft flybys. She played a major role in obtaining the first spacecraft images of asteroids 951 Gaspra and 243 Ida during the Galileo mission flybys in the early 1990s. Harch also was the first to notice evidence for Ida's moon, Dactyl. In June 1997, during the NEAR mission, Harch succeeded in imaging 253 Mathilde and got the last-minute shots of Eros last December.

Brian Marsden, director of the IAU's Minor Planet Center in Cambridge, Mass., says that 9251 Harch is among the 223 asteroids given names last week, the biggest batch in astronomical history. Researcher Harch joins about a half-dozen other Cornellians whose names have been bestowed on celestial bodies.

Asteroid 9251 Harch is some 236 million miles from the sun, somewhere between the planets Mars and Jupiter. It began as nothing more than a pinpoint on a photographic plate, captured by Tom Gehrels, an astronomer at the University of Arizona, on Sept. 26, 1960, during a sky survey using the 48-inch Schmidt telescope at the Palomar Observatory on Mount Palomar, Calif.

Gehrels shipped the plates from his survey to astronomers Kees van Houten and Ingrid van Houten-Groeneveld at the Leiden Observatory in the Netherlands. Scanning the plates, the Dutch astronomers discovered about 2,400 asteroids -- often described as minor planets -- and calculated their general orbits. An asteroid, later dubbed 4896 P-L, was among them.

But confirmation of the asteroid's orbit did not come until spring 1997, when astronomers at the Massachusetts Institute of Technology's Lincoln Laboratory conducted a sky survey with a charge-coupled device (CCD)-enhanced telescope and found an object temporarily named 1997 HK12, according to Marsden. Gareth Williams, the associate director of the Minor Planet Center, then calculated that 1997 HK12 and 4896 P-L were one and the same.

Astronomical tradition dictates that discoverers get first crack at naming a celestial object. But the Dutch astronomers, who had discovered thousands of asteroids, ran out of ideas and, says Marsden, "threw up their hands."

The IAU agreed to name hundreds of these objects. Yeomans served on the IAU naming committee and suggested names for six of the asteroids. Harch's was among them.