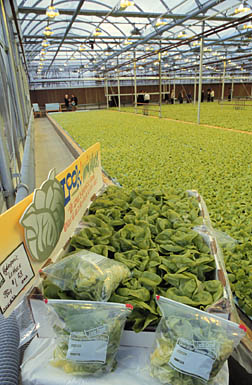 Frank DiMeo/Cornell University
Behind a display of lettuce, rows of plants grow indoors in hydroponic beds under computer controlled conditions.

Imagine that it's a frigid 15 degrees Fahrenheit outside. Salt trucks are out on the roads, and children are building snowmen.

It's a perfect day to harvest lettuce. Thanks to Controlled-Environment Agriculture, a Cornell University-developed pilot project, hydroponic greenhouses in the winter-bound Northeast might soon be able to compete lettuce head to lettuce head with growers in California and other warmer climes.

From seedling to salad, it takes 35 days to grow one head of hydroponic lettuce. While the average Boston lettuce grower in California might harvest three crops from the ground during the year, the controlled-environment greenhouse produces an average of 16 full crops annually per square foot. If a standard California grower can harvest 45 tons of the crop per acre per year, the pilot greenhouse outside Ithaca can harvest 390 tons an acre per year.

In other words, an upstate New York, controlled-environment greenhouse can grow on one acre what takes six or seven acres of soil in California, says Robert Langhans, Cornell professor of floriculture and ornamental horticulture and director of Cornell's controlled-environment program. And in New York the growth and harvest are continuous, he says.

"There are few things in agriculture that have the potential as this," says Langhans. "If this project works, it's going to be spectacular."

The 9,000-square-foot pilot facility, located on Route 13 and Pinckney Road in Dryden, N.Y., cost about $500,000 to build. Ground for the facility was broken in 1997, and it produced its first harvest last May. New York State Energy Research and Development Authority, along with New York State Electric and Gas, Niagara Mohawk and Agway Country Products Group, Syracuse, N.Y., helped fund the project.

The unusual building is largely made of glass to cover a ground-level pond, which is filled with nutrient-rich water for hydroponic growing. Even in the throes of a fierce upstate winter, the plants bask in warmth. And because the environment is controlled, the greenhouse never has to use pesticides or herbicides.

The lettuce seeds are planted on small trays and germinate in enclosed growing rooms for the first 10 days. On day 11, the tiny lettuce plants are placed on Styrofoam growing flats in a greenhouse pond for 10 days. The plants then are respaced on flats to grow for two weeks in larger hydroponic ponds.

Every day, 1,000 heads of Boston lettuce are harvested and trucked to the Wegman's grocery chain in Rochester, N.Y., and to other outlets in the Northeast. The Cornell researchers hope the plant pilot will help lead New York into growing other products like spinach, Swiss chard, bok choy, tomatoes and peppers in similar controlled-environment, hydroponic greenhouses. Agway hopes to market the concept commercially to the state's growers and assist them in marketing the produce nationwide.

"New York's shorter growing season places our agricultural industry at a disadvantage with many other states," says F. William Valentino, president of the New York State Energy Research and Development Authority. "As a result, we import about $1 billion of fresh vegetables every year. Controlled-environment agriculture offers the potential to create a new type of farming industry that keeps New York's farms producing year round."

The authority's role in this program has focused on gaining energy efficiency to minimize energy costs as well as to maximize grower profits, because of the energy-intensive lighting and pumping required in hydroponic technology.

"As far as natural light is concerned, it's up and down, up and down for the plants," says Albright.

By comparison, Albright's lighting provides consistent light to the plants in winter and offers shade in the summer. The program monitors the amount of sunlight during the day, activating greenhouse lights as much as possible during off-peak periods, thus reducing electricity costs and reducing the load on utilities.