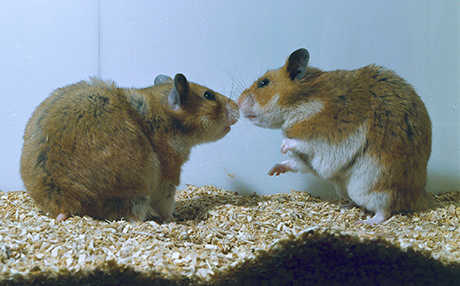 Animals - and probably humans, too - can distinguish strangers from unfamiliar kin by comparing body odors to their own, Cornell University psychologists have shown. Their experiment is the first unequivocal demonstration of what researchers call "the armpit effect" - even when that particular part of the anatomy is not involved.

Long suspected but never seen, the phenomenon known as "self-referent phenotype matching" occurs when golden hamsters (Mesocricetus auratus) use their own scent to distinguish unrelated hamsters from their biological siblings, Jill M. Mateo and Robert E. Johnston report in the April 7, 2000, issue of Proceedings: Biological Sciences of the Royal Society of London (Vol. 267, issue 1444). Johnston is a professor and Mateo is a research associate in Cornell's Department of Psychology.

"Hamster smells come from scent glands on their flanks, not from their armpits," explained Mateo in a pre-publication interview. "But there's no doubt about it. This is the armpit effect in action."

"Phenotype" is just an another word for "trait, " Mateo said. "And phenotype matching is comparing two individuals' traits, often for purposes of kin recognition. To determine if someone is related to you, you might compare their traits to your memory of what your relatives are like. Self-referent phenotype matching is when you use yourself as a referent, rather than your close relatives."

The idea that animals can distinguish unfamiliar kin from unrelated strangers - by knowing something about themselves such as their visual image, their voice or their own smell - has been debated for more than 30 years. Then Mateo and Johnston devised a separated-at-birth test for laboratory hamsters, as stand-ins for humans and other animals. 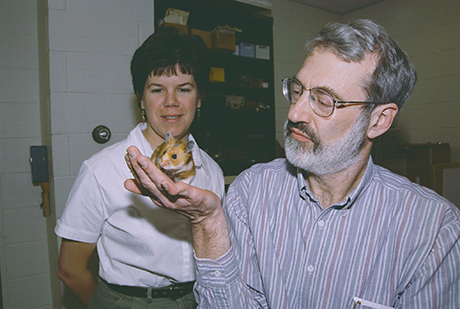 "Self-referent phenotype matching can serve any of several functions," Mateo said. "It can function in nepotism, when you favor close relatives and need to know how closely related you are to them. Or it can help in choosing a mate, so you can avoid breeding with a close relative. We're not saying anything about the function of the armpit effect - just that it occurs and it is not an impossibility in an evolutionary sense."

For the separated-at-birth experiment, Mateo took newborn laboratory hamsters from their mothers and siblings - before their odor-sensing capabilities had developed -- and placed them with unrelated mothers and unrelated young hamsters. Raised among strangers, the hamsters had no kin smell cues except their own.

Seven weeks later, the young females were sexually mature and their odor-sensing capabilities were in their prime. Presented with a choice of flank-gland scents from a variety of other hamsters - unrelated and closely related kin, familiars as well as total strangers -- the test subjects consistently "preferred" unrelated strangers over unfamiliar biological siblings or unrelated foster siblings.

"We tested the females at a time in their reproductive cycles when they may be choosing a mate and are most interested in odors," Mateo said, "and at a time when they would need to recognize their unfamiliar siblings."

And so they did, in the hamster kind of way: While researchers stood by with stopwatches, the hamsters indicated their preference by moving quickly to scents of unfamiliar nonrelatives and spending the most time sniffing those. They took somewhat longer to check out the scents of their foster siblings (the unrelated hamsters they were raised with) and they spent less time with those scents. They took the longest amount of time to approach odors of their unfamiliar, biological siblings, and spent the least time smelling them.

In a test of agonistic marking behavior (in which hamsters rub their flank glands to mark territories and warn undesirable animals) the females were less likely to mark after smelling unfamiliar non-kin. That is, they were less agonistic toward potential mates and more likely to warn off close relatives at mating time. To avoid confusion with other cues, such as the sight of other hamsters, the scent chemicals were presented on glass slides; donors of the flank-gland smells, which are odorless to most humans, were out of sight.

"Our results provide the first clear evidence for a self-matching mechanism in vertebrates, despite over 30 years of kin-recognition research," Mateo and Johnston concluded in their Royal Society report.

The results are all the more remarkable, Mateo commented, because the armpit effect was seen in a highly inbred group of laboratory animals with a very similar genetic makeup. All the world's laboratory golden hamsters (and most hamster pets) trace their ancestry back to several wild M. auratus that were captured in of Syria in the 1930s, she said. Yet, there is enough genetic difference between individual hamsters to permit the production of sufficiently different smells. Scent production in hamsters (and in humans) is believed to be influenced by the so-called major histocompatibility complex (MHC) , the set of genes underlying animals' immune systems and responsible for recognition of self and nonself protein, Mateo observed.

Exactly how hamsters use the armpit effect to remember their own scent is not clear, Mateo said. "We never saw them sniffing themselves, but they certainly know what they smell like. Because of the way we structured this experiment, there is no other way they could have known the scent of their family. Any time you need to discriminate accurately among kin, this (self-referent phenotype matching) is the way to do it."

The study was supported by a grant from the National Institute of Mental Health (NIMH).