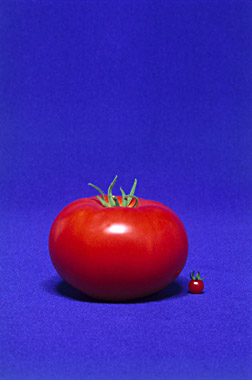 Photo by Kent Loeffler/Cornell
Large tomatoes can evolve from wild, blueberry-size tomatoes. The genetic mechanism responsible for this is similar to the one that proliferates cancer cells in mammalians.

The genetic mechanism that through millennia of evolution has created plump and juicy fruits and vegetables could also be involved in the proliferation of human cancer cells.

Studying the genetic map of the tomato (Lycopersicon esculentum), the researchers found a "plumping" characteristic in a single gene called ORFX — traits that are expressed early in the plant's floral development. The protein sequence obtained from the gene was predicted by computational data to be similar to the human oncogene c-H-ras p21, suggesting a common mechanism in the cellular processes leading to large, edible fruit in plants and cancer in humans. The research is detailed in the latest edition (July 7) of Science.

"We're beginning to understand that there are very common mechanisms that create life," says Steven D. Tanksley, Cornell Liberty Hyde Bailey Professor of plant breeding and the lead author of the research paper. "This is a case where we found a connection between agricultural research in how plants make edible fruit and how humans become susceptible to cancer. That's a connection nobody could have made in the past.

"In this era of genomics, many people are looking at divergent organisms, and we're starting to realize connections we never imagined," Tanksley says.

The discovery springs from the Cornell researchers' attempts to identify the remote evolutionary changes that led to the bountiful produce associated with modern agriculture. Tanksley explains that wild fruit and vegetable varieties were not always fit for human consumption. Usually they were too scrawny to provide much nourishment. But over millennia, not only did humans cross plants, but the plants also crossed themselves. Thus, many varieties became fleshy enough to eat.

Corn kernels were not originally succulent, and wild tomatoes looked more like red blueberries. "When you see a beautiful ear of corn, you're actually looking at a gross exaggeration of the corn's real anatomy. Tomatoes and all other fruits and vegetables show the same thing, compared with their ancestors. They have gross exaggerations of the specific particular parts of their anatomy — their fruit for example — valued by humans," says Tanksley.

If not for this mechanism, humans would not have developed beyond the hunter-gatherer stage, and modern civilizations would not have been born. "We're now codependents with domesticated fruits and vegetables. Without them, we can't sustain ourselves, and without us the domesticated plants can't sustain themselves either," says Tanksley. "The humans and the plants have been caught up in a dance of co-evolution."

The Cornell researchers were able to peer into the primeval development of food with the aid of computer science. They found a genetic quantitative trait locus, or QTL (the location of specific characteristics on genes), involved in the evolution and domestication of a tomato from small berries to what has become a large fruit. The ORFX gene, located at fw2.2 on the plant's DNA, changes fruit weight by up to 30 percent. The researchers say this gene is a key to domesticating wild plants.

The discovery might have taken decades if the researchers had used conventional methods. After obtaining the nucleotide sequence from the gene, which in turn provided the protein sequence, Tanksley collaborated with Ron Elber, Cornell professor of computer science and acting director of the Center for Parallel Processing Resources for Biomedical Scientists at Cornell. Using a computational biology program developed at the Cornell Theory Center, the scientists created a three-dimensional structure from the protein sequence. The software they used is called the Learning, Observing and Outputting of Protein Patterns (LOOPP), which matches sequences and protein structures.

Elber and researcher Jaroslaw Meller matched the novel tomato sequence with known three-dimensional protein shapes and found a hit. Using as a template the structure of the ras (human oncogene) protein, they were able to identify some of the protein's specific chores. "Putting the protein into 3-D shape gave us guidelines for what to look for, and to see the critical amino acids," says Elber. "Without any hints, it is difficult."

The algorithm developed by Meller and Elber at Cornell is exceptionally efficient. It identified the tomato gene in less than a minute.

Says Tanksley: "It's astounding this kind of research could be done at the speed at which it was done. This would have been impossible a few years ago."

Other authors of the Science paper, "fw2.2: A Quantitative Trait Locus Key to the Evolution of Tomato Fruit Size," are researchers Anne Frary and Esther ven der Knaap; visiting fellows T. Clint Nesbitan and Silvana Grandillo; Cornell graduate student Amy Frary; and postdoctoral researchers Meller, Bin Cong and Jiping Liu. The late Kevin B. Alpert, who earned his doctoral degree with Tanksley, was an integral part of the paper's research. Alpert died April 1, 1999, from amyotrophic lateral sclerosis. The paper was dedicated to him.