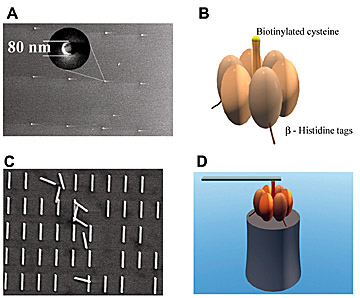 Success in fabricating and operating hybrid organic-inorganic nanodevices the size of virus particles is reported by the Cornell team of biophysicists and engineers in the Nov. 24 issue of the journal Science .

Fueled by adenosine triphosphate (ATP, the so-called energy of cellular life) and spinning nickel propellers at eight revolutions per second, molecular motors made of ATPase enzyme are said to herald a new generation of ultrasmall, robotic, medical devices: "nanonurses" that move about the body, ministering to its needs, for example, or "smart pharmacies" that detect chemical signals from body cells, calculate the dose and precisely dispense drugs.

"With this demonstration, we believe we are defining a whole new technology," said Carlo D. Montemagno, associate professor of biological engineering and leader of the molecular-motor mechanics. "This technology opens the door to hybrid nanodevices that can be assembled, maintained and repaired using the physiology of life."

Montemagno credited Cornell graduate student Ricky K. Soong with assembling the propeller-equipped nanodevices and noted that patent applications are in place for the relevant technologies.

Other Cornell authors of the Science report, titled "Powering an Inorganic Nanodevice with a Biomolecular Motor," are research associates George D. Banchand and Hercules P. Neves; graduate student Anatoli G. Olkhovets; and Harold G. Craighead, professor of applied and engineering physics and director of the Cornell Nanobiotechnology Center. Nanobiotechnology is the relatively new enterprise to merge living systems, including products of genetic engineering, with fabricated nonliving materials, such as silicon, at the "nano" scale, where a nanometer (nm) equals one billionth of a meter. The Cornell molecular motors have propellers about 750 nm in length and 150 nm in diameter (whereas viruses range from about 17 nm to 1,000 nm wide).

Credit: Montemagno Research Group/Cornell UniversityCopyright © Cornell University
CCD video image sequences (A and B) of nanopropellers being rotated at diferent velocities by the ATPase biomolecular motor.

The little metal propellers were made at the Cornell Nanofabrication Facility using a sequence of techniques, including electron gun evaporation, e-beam lithography and isotropic etching. Thin coatings of attachment chemicals, described in detail in the journal article, encouraged the propellers essentially to self-assemble with molecules of ATPase, which were produced from genetically altered Bacillus bacteria. Mounted on 200-nm-high pedestals and immersed in a solution of ATP and other chemicals, some of the biomolecular motors spun their propellers for two-and-a-half hours.

But before the nanodevices take flight, "We need to achieve a higher level of site occupancy," said Montemagno, noting that "only" five of the first 400 propeller-equipped motors worked. Some propellers came loose and flew off. Some motors apparently dropped off their test pedestals and others never took their places in the first place.

Eventually, the Cornell nanobiotechnologists would like to engineer biomolecular motors to run on light energy, with photons instead of ATP. They also plan to add computational and sensing capabilities to the nanodevices, which ideally should be able to self-assemble inside human cells.

Cornell scientists are learning to clean away caustic chemicals left over from the nanofabrication processes with inorganic materials so that delicate living molecules are not hindered. Then there is the clumping problem: "These machines are as small as virus particles," Montemagno said. "It's hard to prevent them from clumping together. Remember, this is all new for us -- and for everyone else in this line of work."

Video image sequences nanopropellers rotating on biomolecular motors can be viewed as movies at:http://falcon.aben.cornell.edu/News2.htm after expiration of publication embargo.