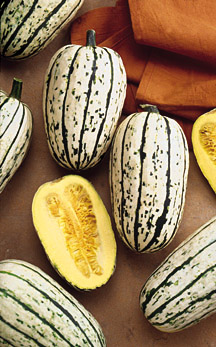 A lush, tasty squash with cream-color skin and forest-green stripes, named Cornell's Bush Delicata, has been named a 2002 All-America Selection (AAS), a seed-industry award. It is the first Cornell University-developed variety to win the prestigious award in 39 years.

The squash, bred by Molly Jahn, Cornell associate professor of plant breeding, and George Moriarty, Cornell research plant breeder, combines the best features of an heirloom-type delicata. That squash is noted for excellent eating quality and disease resistance, which reduces the need to apply fungicide during the growing season. The delicata squash was popular in the early part of the 20th century, but went out of style due to poor yields and susceptibility to disease.

Cornell's Bush Delicata is not a hybrid, as are most modern crop varieties, but an open-pollinated variety, which means the seed can be saved. It has the sweet and nutty heirloom flavor with uniform, deep yellow color and thick flesh, but better yield than the delicata. "The organic growing community is going to be very interested in this," says Moriarty.

The award is the highest honor that can be bestowed on a vegetable variety in North America. The only other Cornell-developed vegetable to win the award was buttercrunch (bibb) lettuce in 1963, developed by the late George Raleigh, Cornell professor of vegetable crops. "The award reflects that Cornell's Bush Delicata was judged outstanding in an international competition consisting of trials from Florida to Alberta. This carries more weight than any other industry judging activity," says Jahn. "This honor is sought by all the companies and rarely goes to the public sector." The new squash had humble beginnings in the vegetable aisle of a P&C grocery store in Ithaca's East Hill Plaza. That is where Henry Munger, now a Cornell professor emeritus, purchased a delicata-type squash in the late 1980s. Over the years, Jahn and Moriarty used the seed from this single squash in a breeding program to transfer resistance to powdery mildew, the most virulent fungal disease of squash in many parts of the world. They crossed the plant with acorn squash, hoping to get a disease-resistant acorn with improved eating quality and a novel appearance. But the original cross kept segregating back to its parents, delicata and acorn.

The breeders kept selecting and inbreeding plants to produce delicata-shaped resistant to mildew and with compact stature, good for both home gardeners and commercial producers. The product yielded a heavy load of winter squash with good color, quality, and shape, says Moriarty. It also was used as a parent of Harlequin, an acorn squash-type hybrid, also released by the Cornell breeders that narrowly missed becoming an AAS award winner last year. "If you have never eaten a delicata squash, this is the one to grow to eat," according to the AAS web site. "The orange flesh color indicates it is rich in vitamin A. The sweet flesh is fine textured without coarse strings."

Cornell's Bush Delicata has a long shelf life -- about 100 days -- and it will remain edible well into the winter months. Harvest can begin about 80 days after sowing the seeds. In 67 years of AAS winners, there have been 323 flowers, 255 vegetables and 17 bedding plants.