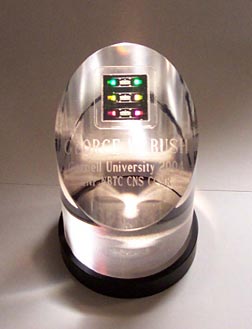 The chip is mounted in this lucite paperweight for presentation to the White House.

In a salute to nanotechnology, Cornell University researchers have etched the world's smallest, full-color American flag on a silicon chip. The flag is part of an elaborate nanofabrication that includes six full-color flags and 15 White Houses, all etched on the chip.

The size of a postage stamp, the chip has been placed in a Lucite paperweight that will be presented to the White House on Tuesday, March 30, in Washington, D.C., by Joshua Wolfe, a 1999 Cornell graduate and managing partner of Lux Capital, a New York City venture capital firm specializing in nanotechnology. It will be accepted on behalf of President George Bush by John Marburger III, science adviser to the president.

Later an identical paperweight will be presented to Rep. Sherwood Boehlert (R-N.Y.), chairman of the House Science Committee.

A closeup view of one of the flanking flags. The colors are created by nanoetched lines that diffract specific wavelengths of light.

"To put all of this into perspective, three stars on the flag that flies over the nano-built White House would fit across the width of a red blood cell," says Carl Batt, Liberty Hyde Bailey Professor of Food Science at Cornell, who is developing food-safety biosensors using nanotechnology. "The wires inside today's computer chips are now routinely thinner than the thinnest column in the White House nano-images. In fact you could line-up five computer wires across the width of the White House column."

The nanofabricated American flags and White Houses were created by Cornell research associates Scott Stelick and Madanagopal Kunnavakkam, both of whom work in Batt's laboratory. The chip was made to honor the 21st Century Nanotechnology Research and Development Act, which authorizes four-year funding for nanotechnology research starting in 2005. The legislation, introduced by Boehlert, creates programs supported by the National Nanotechnology Initiative.

Nanofabrication is used to create structures at the atomic and molecular levels, equal to 1/100,000th the diameter of a human hair. It offers hope for disease detection, environmental monitoring, energy production and improvements in electronic circuitry.

Provided
A microphoto of the chip design. The White House, including the tiny flag flying over it, is monochrome, but is flanked by two nanoetched flags in color.

The six red-white-and-blue flags on the chip each measures 3 millimeters by 1.5 millimeters, and when the chip is held at an angle, the colors are reflected by a pattern of lines etched into a thin layer of glass coating a silicon wafer. The lines were spaced at nanometer dimensions (about three silicon atoms) to diffract specific wavelengths of light. It is this light diffraction that produces the red, white and blue.

If the three-color flag were any smaller, the colors would disappear. Objects at the nanoscale are devoid of color since their dimensions are smaller than a wavelength of light. In the flag, the stars, depicted as squares, are 75 micrometers across, or one-half the width of a human hair. Each white star is made of 36 separate lines spaced to reflect, blue, green and red light. When the light diffraction from red, green and blue combines, the human eye sees white.

Each stripe on the flag is made up of 52 separate lines. The spacing for the blue and green lines is 72 nanometers, and from green to red, 45 nanometers.

Other Cornell NSF-supported nanotechnology facilities whose science and technology helped in the production of the flag were the Nanobiotechnology Center, the Cornell Center for Materials Research and the Center for Nanoscale Systems.