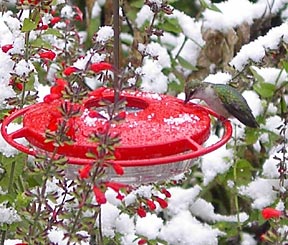 Last winter's sightings of hummingbirds in the Southeast sent Project FeederWatch volunteers to their calendars for a reality check. So did robins and bluebirds in the northern United States - another example of birds-in-unexpected-places that professional ornithologists and birders call "vagrants."

So-called common knowledge places these birds in warmer climates during the coldest months. Now, thanks to the help of bird-feeding enthusiasts from across North America, researchers at the Cornell Lab of Ornithology know that common knowledge is changing.

As another season starts for the more than 15,000 observers in the Cornell lab's most popular citizen-science program, Project FeederWatch, scientists are asking citizen-scientists to be on the lookout for even more vagrants.

FeederWatch volunteers count the numbers and kinds of bird species that visit the winter bird feeders around their homes, then send their observations - via paper data forms or over the Web - to researchers at the Cornell Lab of Ornithology. These observations are combined so that scientists can determine the population status and distribution of the birds over time and across their North American winter range.

Each Fall, people of all ages and skill levels are invited join Project FeederWatch by signing up at the Web site http://www.birds.cornell.edu/pfw/ or by calling the Cornell Lab of Ornithology at 800/843-2473 (in Canada, contact Bird Studies Canada at 888-448-2473). The $15 enrollment fee ($12 for Lab members) helps defray the cost of materials. Participants receive a full-color identification poster of common feeder birds, a calendar, the FeederWatcher's handbook, instructions, access to the online data entry system, and a one-year subscription to BirdScope , the newsletter of the Cornell Lab of Ornithology.

Longtime FeederWatchers had considered feeding hummingbirds to be a summertime activity in the eastern United States and Canada. These fast-flying dynamos move northward as the spring flowers begin to bloom. As summer fades, hummingbirds were expected to migrate south, long before the last leaves drop, for continued access to nectar supplies. More recently, however, some observers in the Southeast and Gulf Coast have been seeing hummingbirds in winter without traveling to Arizona, California and points south.

Perhaps more surprisingly, these are not the same birds or even the same species seen in the region during the summer. The ruby-throated hummingbird is the only species found east of Texas during the breeding season. During the winter, however, most hummingbirds in the Southeast and along the Gulf Coast are actually rufous hummingbirds. This species typically winters in Mexico, but vagrants were reported throughout the Southeast and as far north as Ohio last winter. Bird banders in the Carolinas recorded rufous, black-chinned, and calliope hummingbirds last winter - all species that breed in the West and normally winter in the tropics.

That raises an interesting question for David Bonter, a Cornell researcher and FeederWatch project coordinator: Are the winter ranges of hummingbirds really changing? Says Bonter: "Without more historical data it is difficult to know for sure. But given the vast amount of data provided by FeederWatch participants, we are certainly learning that many birds are choosing to winter in the U.S."

Hummingbirds are not the only species showing up in unexpected places. In the Northeast, robins and bluebirds were typically regarded as a sure sign of spring … until, that is, FeederWatch reports confirmed these species throughout New England during any month of the year. "The counts submitted by volunteers are forcing us to reexamine the conventional wisdom regarding the whereabouts of birds in winter," says Bonter. (Although they are not seed-eaters, robins and bluebirds can be attracted to feeders that offer fruits, mealworms, and possibly suet, he hints.).

FeederWatch data also have documented the recent shifts in the distribution of birds in the West - possibly in response to forest fires. Researchers found that pinyon jays visited feeders more often than normal after widespread wildfires impacted their preferred habitats and food supplies. Other species, like the white-crowned sparrow, were difficult to find last winter in areas of California that had been affected by the worst fire season in state history. In fact, FeederWatch counts of white-crowned sparrows dropped to a 16-year low in California. Bonter points out that although it is difficult to link changes in sparrow counts to the fires of 2003, the winter distribution of these birds could shift in response to the availability of food and habitat.

With more bird enthusiasts sharing their observations with scientists, much more can be learned about bird populations. FeederWatchers provided nearly 5.6 million bird observations during the 2003-2004 FeederWatch season. The cumulative FeederWatch database will top one million checklists during the project's 18th season, which starts in November.

Some ornithological "vagrants" reported to Project FeederWatch last winter are easy enough to explain. For example, the monk parakeet sighted in Elmont, N.Y., on Dec. 8, 2003, probably is a former pet that escaped. But how to account for the Lucy's warbler wintering in Oregon (only the second in state history) or the Western tanager in Florida (far north of its winter range in Central America)? Not to mention the rufous hummingbird in chilly Ohio. Scientists at the Cornell Lab of Ornithology hope more FeederWatch participants will spot wayward birds this season. In the meantime, the complete list of last winter's FeederWatch vagrants is at: http://www.birds.cornell.edu/pfw/DataRetrieval/RareBird/RareBirds04.htm