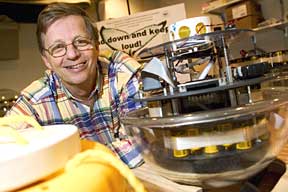 University Photography
Christopher Clark, Cornell's I.P. Johnson Director of the Bioacoustics Research Program, sits with one of the autonomous sea floor recorders in the bioacoustics fabrication facility in the Lab of Ornithology Feb. 16.

WASHINGTON, D.C. -- Why do whales in the North Atlantic Ocean seem to be moving together and coherently? What is impelling them forward. How do they communicate with each other, seemingly over thousands of miles of ocean? And how can this acoustical habitat be protected?

For nearly nine years Cornell University researcher Christopher Clark -- together with former U.S. Navy acoustics experts Chuck Gagnon and Paula Loveday -- has been trying to answer these questions by listening to whale songs and calls in the North Atlantic using the navy's antisubmarine listening system. Instead of being used to track Soviet subs as they move through the Atlantic, the underwater microphones of the Sound Surveillance System (SOSUS) can track singing blue, fin, humpback and minke whales.

From the acoustical maps he and his colleagues have obtained, Clark has come to realize that he has been thinking about whales at the wrong time scale. "There is a time delay in the water, and the response times for their communication are not the same as ours. Suddenly you realize that their behavior is defined not by my scale, or any other whale researcher's scale, but by a whale's sense of scale -- ocean-basin sized," he says.

Clark, the I.P. Johnson Director of the Bioacoustics Research Program at Cornell in Ithaca, N.Y., will discuss his research into the rich acoustical environment of whales at a news briefing during the annual meeting of the American Association for the Advancement of Science (AAAS) Feb. 19 at 3 p.m. in Salon B, mezzanine level, Marriott Wardman Park hotel, Washington, D.C. He also will describe his research in an AAAS seminar Feb. 20 at 8:30 a.m., lobby level, Virginia Suite A, Marriott Wardman Park.

"We know very little about whale communications. That is why we are looking for patterns of association and coordination. The problem is that the whales are spaced so far apart," says Clark. However, the SOSUS system is providing a wealth of new data. In weeklong soundings at the U.S. Navy's Joint Maritime Facility in St. Mawgan, Cornwall, England, Clark has obtained thousands of acoustical tracks of singing whales for the different species throughout the year. "We now have the ability to fully evaluate where they are and how long they sing for," he says. "We now have evidence that they are communicating with each other over thousands of miles of ocean. Singing is part of their social system and community."

Using SOSUS, Clark can move a cursor around a screen and listen in on different areas of the North Atlantic. If he hears a whale singing, he can fix its location and position it in space and time and observe animals that are many tens of miles apart -- cohorts of humpback singers moving coherently -- and watch the collective migration of species in large portions of the ocean basin. "So if I am a whale off Newfoundland, I can hear a whale off Bermuda," says Clark.

"Whales will aim directly at a seamount that is 300 miles away, then once they reach it, change course and head to a new feature. It is as if they are slaloming from one geographic feature to the next. They must have acoustic memories analogous to our visual memories," he says.

Among the puzzling questions yet to be answered is exactly what motivates much of whales' long-distance movements. Watching the positions of fin whale singers, males whose songs are highly repetitious and hierarchically organized, Clark sees on his screen a random collection of dots that seem to be moving together coherently through the ocean. "This is not migration. So what is influencing their movement and distribution? Ocean features associated with resources? If so, what are the features they are cuing in on?" Clark asks.

He notes the irony that just as researchers are gaining new ways of understanding the linkages between whales and oceanographic features, what he is hearing is the rising tide of noise from an increasingly urbanizing marine environment, the collective noises from shipping traffic, oil and gas exploration and production, and recreational traffic. And every decade the amount of noise is doubling.

"Many whales have very traditional feeding grounds and their migratory routes occur along shallow coastlines which are now some of the noisiest, most heavily impacted habitats," Clark explains. But often it is along these routes that the male songs are sent long distance to prospective females, who might not receive the message through the "ocean smog."

Says Clark, "If females can no longer hear the singing males through the smog, they lose breeding opportunities and choices. The ocean area over which a whale can communicate and listen today has shriveled down to a small fraction of what it was less than a century ago."