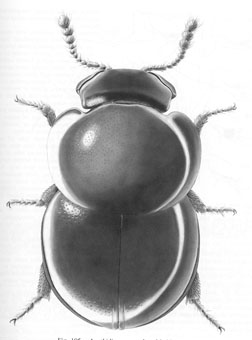 U.S. President George Bush, Vice President Dick Cheney and Secretary of Defense Donald Rumsfeld may not all get a library, airport or highway named after them. But each has a slime-mold beetle named in his honor. Bush thanks entomologist.

The entomologists also named some of the new species after their wives and a former wife, Pocahontas, Hernan Cortez, the Aztecs, the fictional "Star Wars" villain Darth Vader ("who shares with A. vaderi a broad, shiny, helmetlike head"), Frances Fawcett (their scientific illustrator) and the Greek words for "ugly" and "having prominent teeth" and the Latin word for "strange." Many of the other names they used for the recently described beetles were derived from various geographic locations, such as California, Georgia and a few states in Mexico, and for various distinguishing features they discovered on the beetles.

The decision to name three slime-mold beetles after Bush, Cheney and Rumsfeld, however, didn't have anything to do with physical features, says Quentin Wheeler, a professor of entomology and of plant biology at Cornell for 24 years until last October, but to pay homage to the U.S. leaders. "We admire these leaders as fellow citizens who have the courage of their convictions and are willing to do the very difficult and unpopular work of living up to principles of freedom and democracy rather than accepting the expedient or popular," says Wheeler, who named the beetles and wrote the recently published monograph describing the new slime-mold beetle species while a professor at Cornell.

Wheeler is now the keeper and head of entomology at the Natural History Museum in London. The monograph, which is co-authored by Kelly B. Miller, Cornell Ph.D. '01 and currently a postdoctoral fellow at Brigham Young University, was published in the March 24, 2005, issue of the Bulletin of the American Museum of Natural History.

Wheeler and Miller collected and borrowed thousands of specimens of slime-mold beetles -- named for the fungilike molds on which they feed -- in order to study their evolution and classification. In so doing, they found that more than five dozen in North and Central America had never before been described.

According to rules established by the International Commission on Zoological Nomenclature, the first word of a new species is its genus; the second word must end in "i" if it's named after a person; and the final part of the name includes the person or persons who first described the species. That's why all the new slime-mold beetle species' names end with Miller and Wheeler.

For anyone who may want to hunt down one of the new slime-mold beetles named for Bush, Cheney or Rumsfeld, Wheeler says that Agathidium bushi so far is known from southern Ohio, North Carolina and Virginia; Agathidium rumsfeldi is known from Oaxaca and Hidalgo in Mexico; and Agathidium cheneyi is known from Chiapas, Mexico.

President Bush calls to say thanks for the slime-mold beetle