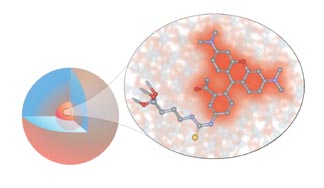 Courtesy of Ulrich Wiesner
Schematic representation of a Cornell Dot, with several molecules of a fluorescent rhodamine dye encapsulated in the center. The dye has been modified with a group that links to the encapsulating silicon.

By surrounding fluorescent dyes with a protective silica shell, Cornell University researchers have created fluorescent nanoparticles with possible applications in displays, biological imaging, optical computing, sensors and microarrays such as DNA chips. These are all applications for which quantum dots have been used or are being considered. But the new Cornell nanoparticles offer an appealing alternative because of their greater chemical inertness and reduced cost.

"People have done superb experiments with quantum dots that were not previously possible," says Ulrich Wiesner, Cornell associate professor of materials science and engineering. "Hopefully Cornell dots will serve the same purpose and offer new possibilities." There are also some interesting physics questions about how the new dots work, he adds.

Quantum dots -- which have been used for the same purpose -- are tiny particles of semiconductors such as cadmium selenide that behave as if they were individual atoms: They can absorb light energy, kicking their internal electrons up to higher energy levels, then release the energy by emitting light. A quantum dot fluoresces much more brightly than a dye molecule, making it a desirable marker.

Cornell dots, also known as CU dots, are nanoparticles consisting of a core about 2.2 nanometers (nm) in diameter containing several dye molecules, surrounded by a protective silica shell, making the entire particle about 25 nm in diameter. The researchers call this a "core-shell architecture." (A nanometer is one-billionth of a meter, about three times the diameter of a silicon atom.)

Like quantum dots, CU dots are many times brighter (20-30 times) than single dye molecules in solution and resist "photobleaching," a process by which dyes in solution rapidly lose their fluorescence. CU dots can be made with a wide variety of dyes, producing a large assortment of colors.

The manufacture of CU dots and early experiments with them are described in a paper, "Bright and Stable Core-Shell Fluorescent Silica Nanoparticles," in the journal Nano Letters (Vol. 5, No. 1) by Wiesner and his Cornell colleagues Hooisweng Ow, Daniel R. Larson, Mamta Srivastava, Barbara A. Baird and Watt W. Webb.

Courtesy of Ulrich Wiesner
C dots bound to immunoglobin-G antibodies attach to the surface of leukemia cells, demonstrating a possible use in biological tagging.

Unlike quantum dots, CU dots are mostly chemically inert. The silica shell is silicon dioxide -- essentially glass. For use as biological markers, quantum dots are encased in a polymer shell -- a process that adds to their already high manufacturing cost. Quantum dots also contain heavy metals like cadmium that can leach through the polymer shell and disrupt the chemistry being observed.

However, Wiesner says, "Silica is benign, cheap and easy to attach, and it is totally compatible with silicon manufacturing technology. That opens enormous possibilities in the life sciences and in information technology."

The Cornell researchers tested the use of CU dots as biological markers by attaching an antibody, immunoglobin E (IgE), and observing how this combination attached to cell receptors on leukemia mast cells.

The dots also offer an intriguing physics question: Why do they fluoresce so brightly? In effect, the whole is brighter than the sum of its parts. "We have this enormous brightness, and we don't know exactly where it's coming from," Wiesner says. Several explanations have been offered. One is that the silicon shell protects the dye molecules from the solvent. A second is that dye molecules floating free can lose energy by actions other than emitting photons, but in the packed core of the particle those other actions are diminished.

The dots were created by Ow, then Wiesner's graduate student. Webb, the S.B. Eckert Professor in Engineering, and Larson, a graduate student in applied and engineering physics now at Albert Einstein College of Medicine, studied their photophysical properties. Baird, director of the Cornell Nanobiotechnology Center, and Srivastava, a postdoctoral researcher, studied the dots as labels on living cells.