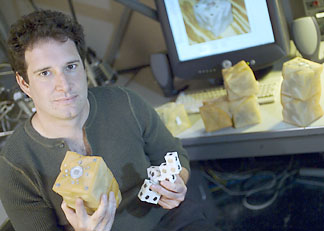 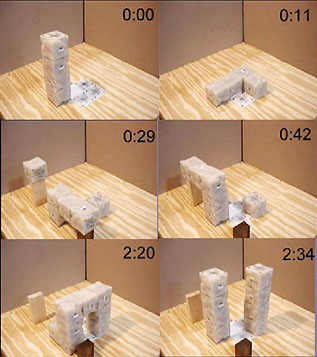 Provided
Frames from a video show the replication process. A robot consisting of a stack of four cubes begins by bending over and depositing one of its cubes on the table. The remaining three cubes pick up additional cubes from "feeding stations" and transfer them to the new robot, which assists in the process by standing itself up.

One of the dreams of both science fiction writers and practical robot builders has been realized, at least on a simple level: Cornell University researchers have created a machine that can build copies of itself.

Admittedly the machine is just a proof of concept -- it performs no useful function except to self-replicate -- but the basic principle could be extended to create robots that could replicate or at least repair themselves while working in space or in hazardous environments, according to Hod Lipson, Cornell assistant professor of mechanical and aerospace engineering, and computing and information science, in whose lab the robots were built and tested.

Lipson and colleagues report on the work in a brief communication in the May 12 issue of Nature.

Their robots are made up of a series of modular cubes -- called "molecubes" -- each containing identical machinery and the complete computer program for replication. The cubes have electromagnets on their faces that allow them to selectively attach to and detach from one another, and a complete robot consists of several cubes linked together. Each cube is divided in half along a long diagonal, which allows a robot composed of many cubes to bend, reconfigure and manipulate other cubes. For example, a tower of cubes can bend itself over at a right angle to pick up another cube.

Although these experimental robots work only in the limited laboratory environment, Lipson suggests that the idea of making self-replicating robots out of self-contained modules could be used to build working robots that could self-repair by replacing defective modules. For example, robots sent to explore Mars could carry a supply of spare modules to use for repairing or rebuilding as needed, allowing for more flexible, versatile and robust missions. Self-replication and repair also could be crucial for robots working in environments where a human with a screwdriver couldn't survive.To begin replication, the stack of cubes bends over and sets its top cube on the table. Then it bends to one side or another to pick up a new cube and deposit it on top of the first. By repeating the process, one robot made up of a stack of cubes can create another just like itself. Since one robot cannot reach across another robot of the same height, the robot being built assists in completing its own construction. 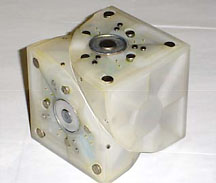 Provided
Each module of the self-replicating robot is a cube about four inches on a side, able to swivel along a diagonal. 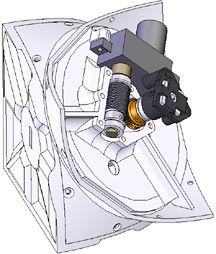 Self-replicating machines have been the subject of theoretical discussion since the early days of computing and robotics, but only two physical devices that can replicate have been reported. One uses Lego parts assembled in a two-dimensional pattern by moving along tracks; another uses an arrangement of wooden tiles that tumble into a new arrangement when given a shove.

Exactly what qualifies as "self-replication" is open to discussion, Lipson points out. "It is not just a binary property -- of whether something self-replicates or not, but rather a continuum," he explains. The various possibilities are discussed in "A Universal Framework for Analysis of Self-Replication Phenomena," a paper by Lipson and Bryant Adams, a Cornell graduate student in mathematics, published in Proceedings of the European Conference on Artificial Life, ECAL '03, September 2003, Dortmund, Germany.

For example, the researchers point out that human beings reproduce but don't literally self-replicate, since the offspring are not exact copies. And in many cases, the ability to replicate depends on the environment. Rabbits are good replicators in the forest, poor replicators in a desert and abysmal replicators in deep space, they note. "It is not enough to simply say they replicate or even that they replicate well, because these statements only hold in certain contexts," the researchers conclude. The conference paper also discusses the reproduction of viruses and the splitting of light beams into two identical copies. The analysis they supply "allows us to look at an important aspect of biology and quantify it," Lipson explains.

The new robots in Lipson's lab are also very dependent on their environment. They draw power through contacts on the surface of the table and cannot replicate unless the experimenters "feed" them by supplying additional modules. 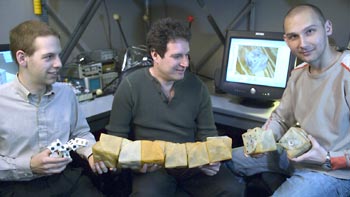