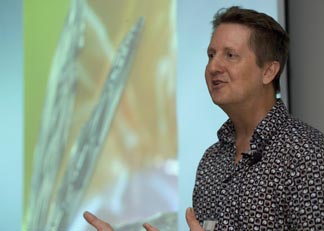 Kevin Stearns/University Photography
Kent Loeffler, a Cornell plant pathology staff photographer, speaks about his work documenting Cornell's Fungi of China Collection June 10 in Mann Library. Twenty of his photographs are on display in the library through at least Aug. 31.

Dead things can be beautiful, and their preservation can make for a good story.

Cornell's Fungi of China collection is the star of a special summer exhibition in Mann Library, with 20 colorful and dramatic digital photographs by Kent Loeffler, a Cornell plant pathology staff photographer whose work has been shown and published worldwide.

"It takes a special eye to see beauty in a 70-year-old fungus specimen, in bits of crumbly fungus," Kathie T. Hodge, Cornell assistant professor of mycology and Plant Pathology Herbarium director, said in a joint Reunion Weekend lecture with Loeffler, June 10 in Mann Library. The photographer joked that his talk was subtitled "My attempt at making beautiful and interesting images from small, shriveled, mostly brown things."

The actual title was "Mushroom Alumni: Remarkable Fungi and Their Return to China," because as part of the Cornell-China New Century Initiative, some of the collection will be delivered back to China, Hodge said. She added that for most of the specimens -- those that can be cut up without destroying their research value or uniqueness -- part of each will be sent to the Chinese Academy of Sciences Institute for Microbiology in Beijing and the other portion kept at Cornell.

The collection is largely the legacy of former Cornell College of Agriculture graduate student Shu-Chun Teng. When he left his doctoral studies unfinished here, Teng traveled across China on horseback in the late 1920s and 1930s, collecting and cataloging some 2,000 specimens, which he sent to Cornell for safekeeping after the Japanese invaded China and overtook Peking (now Beijing) and Nanking (now Nanjing) in 1937. "It was a horrible time for China," Hodge said.

During the same time, another College of Agriculture alumnus, Fang Lan Tai, also sent fungi samples to Cornell via Washington, D.C., smuggling them out by ox cart and then by boat, before parts of the Chinese National Herbarium and other significant research libraries were destroyed by wartime vandalism.

Among the finds preserved at Cornell is Cordyceps myrmecophila, a fungus that invaded an ant, killed it and, leaving only a husk, then spiraled outward. When he opened the specimen envelope, Loeffler said, "There was a funny little round box inside -- and inside that was this little horror story. I chose a blood-red background to accent the horror."

Loeffler detailed his techniques in bringing out the aesthetic beauty of the fungi. Using a Fuji S2 digital camera, he focused on different areas or angles of each small specimen over multiple exposures and then combined the images with photo-editing software. Since many of the samples he was given were drained of color, he used brightly colored gels for the backgrounds. Some of the photographs on the Cornell Plant Pathology Photo Lab Web site, http://ppathw3.cals.cornell.edu/PhotoLab/, can be viewed as animated 360-degree views, he said.

The presentation was also rich in the history of certain Cornell alumni, including Tai and Teng, as well as past faculty and staff members. Hodge cited the work in mycology of Teng's mentor, Herbert H. Whetzel, as well as H.M. Fitzpatrick, Wen-ying Zhuang, Ph.D. '88, and plant pathology professor Richard P. Korf '46.

Korf, now 80 and retired, was present at the lecture and paid tribute to his teachers, including Whetzel, and said there is a need for more amateur mycologists in North America.

"Somehow Europe has continued to foster good amateurs -- they fill journals with research and beautiful photographs. We have no journals that can even compare," Korf said. "We're too diffuse or too professionally minded to foster this. And some of the greatest books on mycology are written by amateurs."

Loeffler is only the third Cornell photographer in his specialty, a successive lineage that began with Willis Fisher from 1907 to 1950 and then Howard Lyon from 1950 to 1985. "I was lucky enough to work with Howie for a year," Loeffler said.

The photography exhibition, subtitled "A journey through time and geography," is scheduled to remain on display through Aug. 31, although Mann Library Director Janet McCue says it may be extended until the end of September to coincide with the Charles Horton Peck New York State Mushroom Foray in Arnot Forest.

There are more than 300,000 fungus specimens in Cornell's Plant Pathology Herbarium, the fourth largest such facility in North America. Data for the collections is being digitized, Hodge said. So far there are more than 24,000 specimens cataloged on the Internet, including more than 7,000 type specimens -- the first of their kind to be found and named.