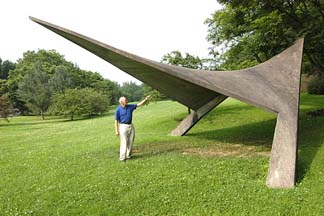 Phil Handler
Professor Donald Greenberg next to the "flying diaper" that he built with architecture and engineering students in the late 1960s at the entrance to Cornell Plantations. Engineering faculty doubted the structure would endure, but it's still standing today. Greenberg went on to found Cornell's computer graphics program, whose graduates have won five Oscars for animation work. He is featured in a video by alumni Phil and Maddy Handler to be shown during Reunion Weekend.

What would Cornell Reunion Weekend be without video portraits of the lives of graduates from the College of Architecture, Art and Planning (AAP) by videographers Phil and Maddy Handler? Cornellians themselves -- Phil is Class of '62, B.Arch. '64, M.Arch. '65, and Maddy is Class of '65 -- they have been creating unique, personal films about alumni for the past six years that have delighted reunion goers and thrilled campus historians.

Reunion Weekend 2005 features two Handler videos. One is "True Big Red," a 30-minute portrait of the life and work of Donald P. Greenberg, the Jacob Gould Schurman Professor of Computer Graphics and the founder of Cornell's Program of Computer Graphics. Greenberg '55, B.C.E. '58, Ph.D. '68, celebrates his 50th undergraduate reunion this year.

"True Big Red" will be shown Friday, June 10, from 11 a.m. to noon at the Johnson Graduate School of Management, B09 Sage Hall, where Greenberg teaches a course called Disruptive Technologies (he also serves on the computer science, art and architecture faculties). Greenberg will be present for the screening and will show his own pioneering 1972 computer graphics film, "Cornell in Perspective," which, he says, "really started computer graphics studies at Cornell."

The second Handler video produced for this year's reunion, "Journey from Sibley," is a 20-minute profile of Jill Lerner '75, B.Arch. '76, an architect and principal at Kohn Pedersen Fox (KPF) Associates -- considered one of the most respected architectural design firms in the world. Lerner is a recently elected Cornell trustee and a former student of Greenberg's. Her video portrait will be shown Friday, June 10, at 9:30 a.m. in Robert Purcell Community Center auditorium on North Campus. It will be followed by a Class of 1975 panel discussion that runs until 11 a.m. Titled "Can That Really Be You? How Cornell Life Influenced Where We Are Today," the panel includes eight Cornellians -- all former students of Greenberg's, including Lerner -- practicing in the areas of architecture, art and technology.

All video showings are free and open to reunion visitors and the public. 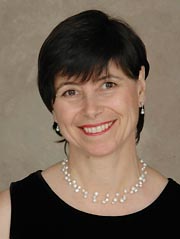 In the Greenberg video, Greenberg talks about his Cornell legacy -- his father, uncles, sister and many other family members are Cornell graduates; his years as an undergraduate -- where his interests were divided between the arts and the sciences; and how he ultimately determined a way to do both, as shown by his 40 years of teaching at Cornell in AAP, the College of Engineering and most recently the Johnson School. He also talks about launching the computer graphics program, now internationally known for its pioneering advances in photo-realistic renderings and for having graduated students who are leaders in computer animation in such studios as Pixar and Sony Imageworks (five have won Oscars). Using vintage photos, the video also includes comments from family, friends, classmates, colleagues and former Cornell Presidents Frank H.T. Rhodes and Dale Corson.

In addition, Greenberg unravels a Cornell campus mystery: "One of the earliest projects, which I still take great pride in, was the building of the hyperbolic paraboloid, nicknamed the 'flying diaper,' at the entrance to Cornell Plantations." Built under his direction by architecture and engineering students in the late 1960s, its structural integrity was questioned by civil engineering faculty back then but it remains standing today, Greenberg notes proudly.

Lerner, whose video honors her 30th Cornell reunion, discusses why she chose Cornell's Department of Architecture, what her student years were like and why her alma mater has come to play such a significant role in her life in recent years (among her volunteer activities are chair of the AAP Advisory Council, member of the Cornell University Council and the President's Council of Cornell Women). In the video, she also relates her experiences at KPF, where she has been since 1994 and became a principal in 1999, her more than 30 years of design and management experience and her large-scale projects for academic and medical institutions. Her story is interspersed with comments from classmates, friends, family and colleagues and relates such professional achievements as her chairing the Memorials Committee for New York New Visions, created following the Sept. 11, 2001, terrorist attacks.

In addition, work by Lerner and the other Friday morning panelists will be on display in the Willard Straight Hall art gallery throughout Reunion Weekend. And Greenberg will take part in a Class of '55 forum Friday, June 10, from 9 to 10:30 a.m. in Alice Statler Auditorium with former Cornell President Frank H.T. Rhodes and Susan Murphy, vice president for student and academic services.

Says Phil Handler: "Six years ago my wife, Maddy, and I decided to do videotaped interviews of alumni of various classes about their experience at Cornell and how it shaped their future lives personally and professionally. While we focused on my college, what we uncovered was both universal and personal. We both take great pleasure in this collaborative project and in having the tools, skills and motivation and resources to give back to Cornell something unique." The Handlers produce their videos entirely voluntarily and donate them to AAP and the university to create a historical record as well as highlight the life and work of Cornell graduates, some of them luminaries, others simply people with interesting lives.

In addition to the Greenberg and Lerner videos, "Being Eisenman," a video made by the Handlers last year on renowned architect Peter Eisenman, and "Portrait of a Cornell Artist: Elsie Dinsmore Popkin, BFA '58" are available on DSpace. A complete set of videos of 40 portraits of AAP graduates by the Handlers resides in the Cornell archives and is found in the holdings of the AAP Fine Arts Library and Visual Resources Library.