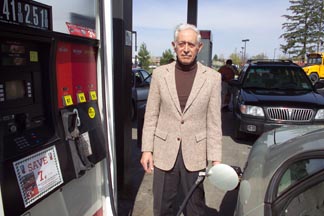 Turning plants such as corn, soybeans and sunflowers into fuel uses much more energy than the resulting ethanol or biodiesel generates, according to a new Cornell University and University of California-Berkeley study.

"There is just no energy benefit to using plant biomass for liquid fuel," says David Pimentel, professor of ecology and agriculture at Cornell. "These strategies are not sustainable."

Pimentel and Tad W. Patzek, professor of civil and environmental engineering at Berkeley, conducted a detailed analysis of the energy input-yield ratios of producing ethanol from corn, switch grass and wood biomass as well as for producing biodiesel from soybean and sunflower plants. Their report is published in Natural Resources Research (Vol. 14:1, 65-76).

In terms of energy output compared with energy input for ethanol production, the study found that:

In terms of energy output compared with the energy input for biodiesel production, the study found that:

In assessing inputs, the researchers considered such factors as the energy used in producing the crop (including production of pesticides and fertilizer, running farm machinery and irrigating, grinding and transporting the crop) and in fermenting/distilling the ethanol from the water mix. Although additional costs are incurred, such as federal and state subsidies that are passed on to consumers and the costs associated with environmental pollution or degradation, these figures were not included in the analysis.

"The United State desperately needs a liquid fuel replacement for oil in the near future," says Pimentel, "but producing ethanol or biodiesel from plant biomass is going down the wrong road, because you use more energy to produce these fuels than you get out from the combustion of these products."

Although Pimentel advocates the use of burning biomass to produce thermal energy (to heat homes, for example), he deplores the use of biomass for liquid fuel. "The government spends more than $3 billion a year to subsidize ethanol production when it does not provide a net energy balance or gain, is not a renewable energy source or an economical fuel. Further, its production and use contribute to air, water and soil pollution and global warming," Pimentel says. He points out that the vast majority of the subsidies do not go to farmers but to large ethanol-producing corporations.

"Ethanol production in the United States does not benefit the nation's energy security, its agriculture, economy or the environment," says Pimentel. "Ethanol production requires large fossil energy input, and therefore, it is contributing to oil and natural gas imports and U.S. deficits." He says the country should instead focus its efforts on producing electrical energy from photovoltaic cells, wind power and burning biomass and producing fuel from hydrogen conversion.