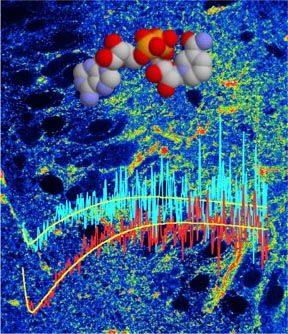 Illustration by H.D. Vishwarao, K.A. Kasischke, M.A. Williams and W.W. Webb
The image above is from the cover of the July 1 issue of the Journal of Biological Chemistry and relates to a "paper of the week" article titled "Conformational dependence of intracellular NADH on metabolic state revealed by associated fluorescence anisotrophy," by H.D. Vishwasrao, A.A. Heikal, K.A. Kasischke and W.W. Webb. Caption: "Metabolic dynamics in the brain are imaged using the fluorescence of endogenous reduced beta-nicotinamide adenine dinucleotide (NADH). Fluorescence measurements, however, are complicated by the dependence of the quantum efficiency of NADH on its free/bound state. Time-resolved fluorescence anisotropy discriminates free/bound NADH and shows a preferential increase in free NADH during the normoxic (blue curve) to hypoxic (red curve) metabolic transition."

By discovering a crucial piece of submicroscopic information about how the brain converts fuel into energy for neurons, Cornell University biophysicists have gleaned new insights into brain cell metabolism that will allow neurologists to better interpret data from such diagnostic tests as positron emission tomography (PET) scans and a specialized magnetic resonance imaging (MRI) test.

The discovery uncovers a key piece of information that has been missing for years about cell metabolism -- how the compound beta-nicotinamide adenine dinucleotide (NADH) interacts in the mitochondria. The researchers discovered that some molecules of NADH are bound to other molecules in the mitochondria, while some are free in two different conformations. Whether NADH is bound or free affects how much it fluoresces in diagnostic tests -- and not knowing this has led scientists in the past to misjudge the amount of activity in neural cells.

The findings, published as a paper of the week in the July 1 issue of the Journal of Biological Chemistry (Vol. 280), are based on research in the biophysics lab directed by Watt W. Webb, the S.B. Eckert Professor in Engineering at Cornell. The journal's cover illustration was designed by Webb with images from his biophysics lab by Karl Kasischke, Harshad Vishwasrao and Dan Dombeck.

Vishwasrao, the lead author of the paper and a former graduate student of Webb's, was able to differentiate between bound and the two forms of free states of NADH molecules based on the rate that molecules rotate, or don't rotate, over nanoseconds of time. He used a technique developed by Ahmed Heikal (now of Pennsylvania State University) in Webb's lab.

NADH concentration has been used as an indicator for cell metabolism for some 50 years, but harmful levels of ultraviolet radiation were required to induce the fluorescence needed for the measurements. Webb and his colleagues, however, devised a technique several years ago that uses short, intense laser pulses of harmless infrared instead of ultraviolet radiation. The technique, called multi-photon laser scanning microscopy (MPLSM), allowed the Vishwasrao team to measure NADH levels in cells with controlled levels of oxygen saturation without damaging the cells. And unlike other methods, such as PET and blood oxygen level dependent functional magnetic resonance imaging (BOLD-fMRI), MPLSM can simultaneously show how the orientation of NADH molecules changes (by measuring their anisotropy) within fractions of a nanosecond.

"One bound NADH molecule is about as bright as 10 free ones," said Vishwasrao. "When we first got evidence that there was free NADH, we thought we made a big mistake. We thought we were crazy. We went back, and the more we talked about it, and the more experiments we did, it became clear. Other groups were seeing the same thing."

When the team used the data to calculate the proportion of bound-to-free NADH molecules in a section of tissue, they found that their calculations resolved inconsistencies that had troubled researchers for years. "The effect is large enough to account for the frequently seen problems," said Webb.

NADH is a good indicator of cell activity for several reasons. First, the molecule is ubiquitous in the mitochondria, where oxidative metabolism takes place. It also naturally fluoresces, which means it can be detected without adding artificial tracers or dyes. And because NADH is converted in the metabolic process to non-fluorescent NAD+, researchers can gauge how much oxidation is occurring in a cell based on its fluorescence.

With this new information, Vishwasrao said, scientists and physicians who study the effects of stroke, Alzheimer's disease and other brain injuries and pathologies will be better equipped to interpret quantitative data from diagnostic techniques they've been using -- without fully understanding -- for years.

"The role of multi-photon imaging and spectroscopy of NADH is not to replace other imaging techniques," he said, "but rather to provide a more detailed microscopic framework of brain metabolic dynamics within which macroscopic techniques, such as BOLD-fMRI , PET and optical scanning, can interpret their respective detected signals."

Webb's lab, the Developmental Resource for Biophysical Imaging Opto-electronics (DRBIO), has yielded other significant advances recently. Last year, Kasischke, formerly of Cornell and now a resident in neurology in Germany, used MPLSM to tease apart the metabolic functions of neurons (nerve cells) and astrocytes (star-shaped cells that provide neurons with fuel). Kasischke's paper filled an important piece of the metabolic puzzle by showing that brain cells have distinct roles in the metabolic process. His team (which included Vishwasrao and Webb) found that neurons use oxygen to convert carbohydrate to energy (a process called oxidation) and that astrocytes kick in subsequently to produce lactate fuel (a process called glycolysis). This confirmed a controversial function based on the hypothesis known as the astrocyte-neuron lactate shuttle, and the finding helped researchers to better understand how the metabolic process works on a microscopic level.

Vishwasrao's current paper is co-authored by Kasischke, Webb and Heikal.