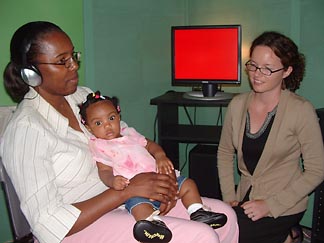 Loretta Falco, University of Toronto, Mississauga
Erin Hannon, right, asks a mother to wear headphones playing music so that she won't influence her baby's behavior. The baby watches a cartoon paired with music on two monitors (one not shown). Hannon measures how long the baby looks at the cartoon paired with each type of music.

Babies have us beat when it comes to picking up languages and distinguishing faces from foreign cultures. But babies also have the beat: Researchers at Cornell University and the University of Toronto find that babies also can recognize unfamiliar musical rhythms far more readily than adults can.

According to two recent studies, six-month-old babies can detect subtle variations in the complex rhythm patterns of Balkan folkdance tunes as easily as can adult Bulgarian and Macedonian U.S. immigrants. But other Western adults find it exceedingly difficult, said Erin Hannon, who receives her Cornell Ph.D. this August before she heads to Harvard University as an assistant professor.

"But by the time babies are 12 months old, they much more closely resemble adults who are more sensitive to rhythms in their own culture's music than to rhythms in a foreign musical culture," said Hannon.

Her studies on how infants learn foreign musical rhythms more readily than adults are co-authored with University of Toronto's Sandra Trehub. Their first study, published in Psychological Science (Vol. 16:1, 2005), tested how well first- and second-generation Bulgarian and Macedonian immigrants as well as North American adults and 6-month-olds can perceive complex rhythmic patterns in Western and Balkan music. Their most recent study, published this week in the Proceedings of the National Academy of Sciences (PNAS) Online Early Edition (Aug. 15-19), added 12-month-olds to the analysis.

Just as babies learn to tune in to the particular sounds that have meaning in their cultures, Hannon suspects that the developmental trajectory for learning musical rhythm is similar to that of language and speech.

Hannon and Trehub assessed infants' ability to detect complex rhythms by monitoring how long the babies stared at a cartoon; the same cartoon was always paired with two different versions of a song -- one version maintained the basic rhythm of the original song (which the babies heard previously), while the other disrupted it.

"If the infants showed greater interest in one of the two versions, it's because they detected a difference between the two," said Hannon, explaining that infant looking time has proven to be a reliable method to assess infant perception.

She said that infant brains are more flexible in processing different word sounds and speech patterns from a variety of speakers, and her research suggests that they also are more flexible than adults in categorizing different types of musical structures. "But it isn't long before they settle on those that are most common and meaningful to their cultures," she added. The state of the brain in adults, however, is much more stable, making it difficult for them to learn foreign languages, recognize faces from unfamiliar racial groups and also, the researchers find, to perceive rhythmic patterns in music foreign to their cultures.

"We actually shape and tune our perceptual processes in a manner that is specific to the music of our culture," Hannon said. "We showed that young infants, who have much less experience listening to music, lack these perceptual biases and thus respond to rhythmic structures that are both familiar and foreign. Although we know that young infants perceive speech in a manner that is language-general, our findings are unique and important in suggesting that the same is true for perception of musical rhythms."

Just as in the case of language, it is adaptive to learn about the structures in your own culture -- it makes you a better and more efficient animal, Hannon said. "Adults become less sensitive to foreign rhythms because they become more efficient at processing familiar rhythmic structures of their own culture (Western) -- this is natural and adaptive."

The research was supported by a Sage Fellowship from Cornell and the National Sciences and Engineering Research Council of Canada.