Imagine this: A tiny, fast switch that uses water droplets to create adhesive bonds almost as strong as aluminum by borrowing a mechanism found in palm beetles.

The new beetle-inspired switch, designed by Cornell University engineers, can work by itself on the scale of a micron -- a millionth of a meter. The switches can be combined in arrays for larger applications like powerful adhesive bonding. Like the transistor, whose varied uses became apparent only following its invention, the uses of the new switch are not yet understood. But the switch's simplicity, smallness and speed have enormous potential, according to the researchers.

"Almost all the greatest technological advances have depended on switches, and this is a switch that is fast and can be scaled down," said Paul Steen, a professor of chemical and biomolecular engineering at Cornell and co-author of a paper published in the Proceedings of the National Academy of Sciences (Vol. 102, No. 34).

Steen dreamed up the idea of the switch after listening to Cornell entomologist Tom Eisner lecture on palm beetles, which are native to the southeastern United States. 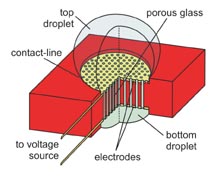 Vogel/Steen, copyright PNAS
The droplet switch shown here toggles between a big droplet positioned above and below the plate using applied voltage. This novel electro-mechanical switch is capable of working by itself or in larger arrays, and has fast switching times with low voltages, no moving solid parts and can be made very small. Applications are envisioned in the areas of mechanics, micro-fluidics and optics, among others.

Like the beetle, which clings to a palm leaf at adhesive strengths equal to a hundred times its own body weight -- the human equivalent of carrying seven cars -- the switch in its most basic form uses surface tension created by water droplets in contact with a surface, in much the same way as two pieces of wet paper cling together.

When attacked, the palm beetle attaches itself to a leaf until the attacker leaves. It adheres with 120,000 droplets of secreted oil, each making a bridgelike contact between the beetle's feet and the leaf. Each droplet is just a few microns wide. Whereas the beetle controls the oil contacts mechanically, Steen's switch uses water and electricity.

For the switch to make or release a bond created by surface tension, a water droplet moves to the top or bottom of a flat plate surface using electricity from electrodes. The electricity moves positively charged atoms, called ions, in the water through the minute capillaries of a thin disk of porous glass embedded in the plate. The water moves and wells up into a micrometer-sized droplet on the plate surface. The exposed droplet can then stick to another surface. To break the bond, electricity pulls the exposed water back through the capillary pores.

With millimeter-sized water droplets and micron-sized pores, 5 volts can turn the switch on in one second. At the same time, the researchers predict that smaller droplets will require less energy to move and have faster switching times. Steen and his colleagues believe that a switch as small as hundreds of nanometers, close to a billionth of a meter and one-tenth the size of the beetle droplets, is within reach. Researchers could also create large effects from many tiny switches by connecting them in various arrangements, Steen said.

"This new technology bridges the gap between scales as large as our hands and nanoscales," said Steen. "We need devices that allow us to communicate between the two scales."

Co-authors include Michael Vogel, a postdoctoral researcher in Cornell's Department of Chemical and Biomolecular Engineering, and researcher Peter Ehrhard at the Institute for Nuclear and Energy Technologies in Karlsruhe, Germany. Since much of this work was conducted while the three scientists were at the German institute, the patent application was filed in Germany.

The study was supported by NASA, the National Science Foundation, the Forschungszentrum Karlsruhe and the Deutscher Akademischer Austausch Dienst.