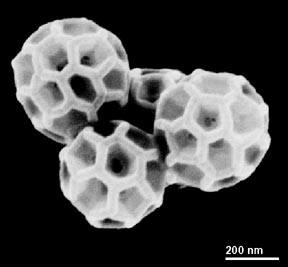 ITHACA, N.Y. -- DNA isn't just for storing genetic codes any more. Since DNA can polymerize -- linking many molecules together into larger structures -- scientists have been using it as a nanoscale building material, constructing geometric shapes and even working mechanical devices.

Now Cornell University researchers have made DNA buckyballs -- tiny geodesic spheres that could be used for drug delivery and as containers for chemical reactions.

The term "buckyballs" has been used up to now for tiny spherical assemblies of carbon atoms known as Buckminsterfullerenes or just fullerenes. Under the right conditions, carbon atoms can link up into hexagons and pentagons, which in turn assemble into spherical shapes (technically truncated icosahedrons) resembling the geodesic domes designed by the architect-engineer Buckminster Fuller. Instead of carbon, the Cornell researchers are making buckyballs out of a specially prepared, branched DNA-polystyrene hybrid. The hybrid molecules spontaneously self-assemble into hollow balls about 400 nanometers (nm) in diameter. The DNA/polystyrene "rods" forming the structure are each about 15 nm long. (While still on the nanoscale, the DNA spheres are much larger than carbon buckyballs, which are typically around 7 nm in diameter.)

About 70 percent of the volume of the DNA buckyball is hollow, and the open spaces in the structure allow water to enter. Dan Luo, Cornell assistant professor of biological and environmental engineering in whose lab the DNA structures were made, suggests that drugs could be encapsulated in buckyballs to be carried into cells, where natural enzymes would break down the DNA, releasing the drug. They might also be used as cages to study chemical reactions on the nanoscale, he says.

The nanoscale, hollow buckyballs are also the first structures assembled from "dendrimerlike DNA." If three strands of artificial DNA are created such that portions of each strand are complementary to portions of another, the three strands will bind to each other over the complementary portions, creating a Y-shaped molecule. By joining several Y's in the same way, Luo's research group created molecules with several arms, a sort of tree shape (dendri- means tree in Greek). Then they attached polystyrene molecules to the dendrimerlike DNA, forming a hybrid molecule called an amphiphile -- a molecule that both likes and hates water. DNA is hydrophillic -- attracted to water -- while polystyrene is hydrophobic -- water repels it. 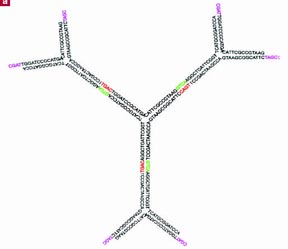 Provided
DNA strands designed with complementary sequences of bases will bind to one another to form Y-shaped structures that can be extended to form "dendrimerlike" (i.e., treelike) forms.

The researchers expected the amphiphiles to assemble in water into some sort of solid structure arranged so that DNA would have a maximum interaction with water and polystyrene would avoid water as much as possible. Other researchers have used other amphiphiles to make spheres, rods and other solids. The hollow buckyballs were an intriguing and serendipitous surprise. A model suggests that one buckyball consists of about 19,000 amphiphiles, with their water-loving DNA mostly on the outside of the rods that form the structure. How these tens of thousands of molecules were able to self-organize to form such an intricate and complex structure is still an open question, the researchers say. They are seeking collaborators to solve the puzzle.

Luo and Ph.D. graduate students Soong Ho Um, Sang Yeon Kwon and Jong Bum Lee described DNA buckyballs in an invited talk titled "Self-assembly of nanobuckyballs from dendrimer-like-DNA-polystyrene amphiphiles" Sunday, Aug. 28, at the 2005 annual meeting of the American Chemical Society in Washington, D.C. They reminded the audience that although the geometry of solid truncated icosahedrons was first described by Archimedes on paper more than 2,000 years ago, the skeletal, hollow-faced version of buckyballs had not been envisioned until Leonardo da Vinci's illustrations in 1494.

Luo added that DNA buckyballs may turn out to have unusual electronic, photonic and mechanical properties, and that because DNA is easily labeled and manipulated, his research group's work offers a way to study in detail the self-assembly process -- a process very important to the future development of nanotechnology.