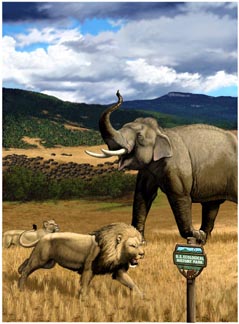 Carl Buell for Cornell University/Nature
Could this be the Great Plains in 100 years? Artist Carl Buell provided this fanciful depiction of a rewilding scene.

If Cornell University researchers and their colleagues have their way, cheetahs, lions, elephants, camels and other large wild animals may soon roam parts of North America.

"If we only have 10 minutes to present this idea, people think we're nuts," said Harry Greene, professor of ecology and evolutionary biology at Cornell. "But if people hear the one-hour version, they realize they haven't thought about this as much as we have. Right now, we are investing all of our megafauna hopes on one continent -- Africa."

Greene and a number of other highly eminent ecologists and conservationists have authored a paper, published in the latest issue of Nature (Vol. 436, No. 7053), advocating the establishment of vast ecological history parks with large mammals, mostly from Africa, that are close relatives or counterparts to extinct Pleistocene-period animals that once roamed the Great Plains."If we only have 10 minutes to present this idea, people think we're nuts," said Harry Greene, professor of ecology and evolutionary biology at Cornell. "But if people hear the one-hour version, they realize they haven't thought about this as much as we have. Right now, we are investing all of our megafauna hopes on one continent -- Africa."

The plan, which is called Pleistocene rewilding and is intended to be a proactive approach to conservation, would help revitalize ecosystems that have been compromised by the extinction of many of the continent's large mammals, many of them predators. It would also offer ecotourism and land-management jobs to help the struggling economies in rural areas of the Great Plains and Southwest.

During the Pleistocene era -- between 1.8 million to about 10,000 years ago -- North America's ecosystems were much more diverse. As animals became extinct, many gaps developed in the web of interactions that makes up a healthy ecosystem. These gaps could be filled by restoring animals that are counterparts to the extinct Pleistocene-period animals, the researchers said.

For example, 4 million years of being hunted by the now extinct American cheetah (Acinonyx trumani) was probably why the pronghorn (Antilocapra americana) -- an antelopelike animal found throughout the deserts of the American Southwest -- developed such blinding speed, clocking in at around 60 miles an hour. Introducing free-ranging African cheetahs back to the Southwest, the scientists assert, could restore strong interactions with pronghorns and provide endangered cheetahs with new habitat. 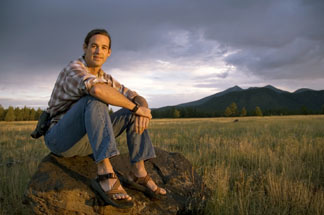 "Obviously, gaining public acceptance is going to be a huge issue, especially when you talk about reintroducing predators," said the paper's lead author, Josh Donlan, a graduate student in Cornell's Department of Ecology and Evolutionary Biology, pointing to the controversy that raged when wolves were reintroduced to Yellowstone National Park in 1995. "There are going to have to be some major attitude shifts. That includes realizing predation is a natural role, and that people are going to have to take precautions."Other living species that are counterparts to Pleistocene-era animals in North America include feral horses (Equus caballus), wild asses (E. asinus), Bactrian camels (Camelus bactrianus), Asian (Elephas maximus) and African (Loxodonta africana) elephants and lions (Panthera leo).

He said that large tracts of private land are probably the most promising places to start, with each step carefully guided by the fossil record and the involvement of experts and research. "We are not advocating backing up a van and letting elephants and cheetahs out into the landscape," said Donlan. "All of this would be science driven."

A pilot study will test the rewilding notion by releasing the endangered Bolson tortoise on a private ranch in New Mexico. The tortoise, which can weigh up to 100 pounds and once thrived in Arizona, New Mexico, Texas and Mexico, now only survives in a small area of northern Mexico.

Evidence shows that animals near the top of the food chain play important roles in structuring ecological systems and maintaining biodiversity, according to the paper. These keystone species -- animals that contribute to diversity of life and which the rewilding researchers would like to reintroduce -- play a disproportionate role in an ecosystem. Extinction of a keystone species can lead to homogenous landscapes with less biodiversity and different species proliferating and dominating the ecosystem.

For example, when humans almost wiped out wolves and grizzly bears in the United States, the species dynamics shifted. The loss of wolves and grizzlies allowed elk populations to soar. Elk, in turn, ate willows, a favorite food of beavers. As a result, along winter elk ranges in Colorado, beaver populations have declined by 80 to 90 percent. With fewer beavers to create dams that raise water tables, fewer wetlands developed to support willows. Today, there are 60 percent fewer willows in parts of Colorado where beavers have declined.

Similarly, after major predators became extinct in Montana and Wyoming, the number of moose, which eat willows, increased in the Yellowstone National Park area. The loss of willows has negatively impacted the numbers of nesting migrant songbirds.

Co-authors of the Nature paper include University of Arizona professor of geoscience Paul Martin, who had the original vision for Pleistocene, and Michael Soulé, the past president and current board member and science adviser of the Wildlands Project and professor emeritus at the University of California-Santa Cruz.

The Turner Endangered Species Fund, the Environmental Leadership Program and the Lichen Foundation supported the research.