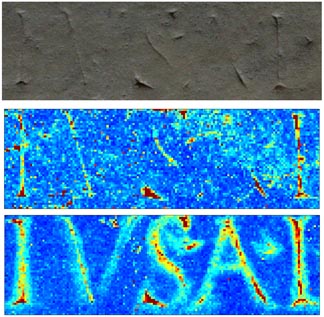 In an unusual collaboration among scientists and humanists, a Cornell University team has demonstrated a novel method for recovering faded text on ancient stone by zapping and mapping 2,000-year-old inscriptions using X-ray fluorescence (XRF) imaging.

"X-ray fluorescence imaging has the potential to become a major tool in epigraphy [the study of incised writing on various surfaces, including stone]," said Robert Thorne, professor of physics and co-author of an article in a German journal titled "Recovering Ancient Inscriptions by X-ray Fluorescence Imaging." "It's just so much more powerful than anything that's been used in the past."

The article describes the first successful application of XRF imaging to the study of ancient stone inscriptions between 1,800 and 2,400 years old. It will be published in August in Zeitschrift fur Papyrologie und Epigraphik (journal for papyrology and epigraphy) , one of the world's leading journals on ancient texts. The discovery could herald an important breakthrough in the study of ancient cultures.

"Inscribed texts are of considerable interest to the linguist and philologist," said Kevin Clinton, Cornell professor of classics, a co-author of the article. "Because of the information contained in them, they are invaluable sources for the historian, archaeologist, art historian and every student of institutions and life in the ancient world."

The findings result from a multidisciplinary effort among Cornell's faculty and graduate students in the departments of Physics, Applied Physics and Classics, as well as members of CHESS -- where the XRF imaging experiments were conducted.

"A synchrotron is a high-intensity X-ray machine," said Donald Bilderback, associate director of CHESS and a Cornell applied physics professor, also a co-author. "It's over a million times more intense than the tube X-ray sources used in medical imaging and in standard XRF analysis."

At CHESS, a high-energy, ultra-intense X-ray beam is produced by the electrons and positrons that circulate inside the synchrotron at almost (99.9999995 percent) the speed of light. This X-ray beam was fired at three inscribed marble stones loaned from Columbia University's Butler Library. Just as with a fluorescent lighting tube in which higher energy ultraviolet light is converted to lower energy visible light by atoms coating the inside surface, atoms illuminated near the surface of the stone emitted lower energy fluorescent X-rays. By using a spectrometer to analyze the energies and intensities of these rays, the concentrations of trace elements in the stone were determined. Because the synchrotron's X-ray beam was so intense, these trace-element measurements could be quickly repeated as the stone was scanned back and forth in the beam, producing a map or image of each element's concentration.

The chosen inscriptions -- one in Classical Greek and two in Latin -- each presented different levels of wear. XRF imaging detected minute amounts of iron, zinc and lead in the inscribed regions, among other elements. Iron chisels were commonly used to inscribe the stones, and the letters were usually painted with pigments containing metal oxides and sulfides. These may account for the iron and lead, but the source of the zinc is a mystery. In the most worn stone, the trace elements measured by XRF clearly revealed the contours of the original letters, even where they were no longer visible to the eye. For modestly worn stones, XRF imaging will help to decipher texts and may provide new information on how the inscriptions were made.

"This means restoring thousands of stones, including, possibly, part of the law code of Draco," said Clinton. Draco was a seventh-century Athenian politician who codified the law of Athens. "It applies to practically any kind of public document you can think of, including many laws, decrees, religious dedications and financial documents."

What's more, an XRF device can be made portable (though collecting the data will be significantly more time consuming than at a synchrotron X-ray facility).

A brief history of a collaboration

In the Mediterranean alone, there are an estimated half-million Greek and Latin inscriptions on stones in various states of decay and legibility. The collaboration that led to XRF restoration grew from conversations between Clinton and his colleague Nora Dimitrova, a Cornell postdoctoral associate in classics. They asked Cornell physicist Bogomil Gerganov if there were any new scientific methods for deciphering worn text. While teaching at the Weill Cornell Medical College in Doha, Qatar, Gerganov raised the issue with Thorne, who was visiting Doha in March 2003. Thorne, also physics course director for the pred-med program in Qatar, was familiar with Bilderback's success in applying XRF imaging to paintings and immediately saw its potential for inscriptions.

Back in Ithaca, Thorne met with Clinton, Dimitrova, Bilderback and John Hunt, an expert in microanalysis at the Cornell Center for Materials Research. A preliminary measurement by Bilderback and his research associate Rong Huang in March 2004 gave encouraging results. Physics graduate student Judson Powers then joined the team. With help from CHESS staff scientist Detlef Smilgies, Powers took over the lion's share of the work and is first author on the team's publication.

The only thing missing: some ancient inscribed stones. No problem. Clinton and Dimitrova had identified suitable samples at the Butler Library and contacted Columbia colleague Roger Bagnall, who arranged for a loan.

By July 2004 the team had proven the principle of XRF imaging in the field of epigraphy.

Thorne finds no small amount of wonder in the process.

"Here we are reading stones that were inscribed with iron chisels 100 generations ago, using invisible rays that are produced by relativistic anti-matter," he said, referring to the synchrotron's role in the experiments.

These first experiments were supported by Cornell's Office of the Vice Provost for Research and by the Department of Classics with additional support from the National Science Foundation (NSF). The collaboration recently received a grant from the Samuel H. Kress Foundation to continue the work. CHESS is supported by the NSF and the National Institutes of Health.