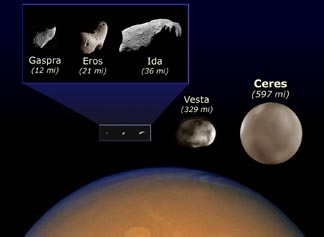 NASA, ESA and A. Feild (STScI)
A Hubble Space Telescope image compares the longest dimension of Ceres with four other asteroids (Gaspra, Eros, Ida and Vesta) and Mars.

When is a space rock more than just a space rock? Ceres 1 was already holding the title of the solar system's largest asteroid.

Now new observations show the space rock may be more worthy of the appellation "miniplanet."

On Sept. 7 NASA released photographs of Ceres that show the rock is a smooth ellipsoid, or oblong sphere, with an average diameter of approximately 590 miles -- about the size of Texas. A scientific paper on the findings, by a group led by Peter C. Thomas, senior research associate at Cornell University's Center for Radiophysics and Space Research, appeared in the Sept. 9 issue of the journal Nature.

Co-author Joel Parker, an astronomer at the Southwest Research Institute in Boulder, Colo., used the Hubble Space Telescope's Advanced Camera for Surveys to snap 267 images of Ceres on Dec. 28, 2003, during a nine-hour period -- one Ceres "day."

Being ellipsoid and smooth is special for a rock. It indicates that the body is heavy enough to possess gravity strong enough to suck its own surface smooth -- a process called "gravitational relaxing." Because the process typically requires a mass of many trillions of tons, depending on the temperature, the average pebble is not going to be gravitationally relaxed; even most asteroids aren't.

By combining the new information on Ceres' roundness with previous independent measurements of its mass, Thomas and his colleagues inferred that Ceres must have a "differentiated interior" similar to the terrestrial planets. Although this possibility had been previously predicted, it was not widely accepted. "We used the best telescope available to apply a basic geophysical test of other people's predictions," Thomas said.

Based on their own models and observations, Thomas and his colleagues believe Ceres contains a rocky silicate core and icy mantel covered by a crust of carbon-rich compounds and clays. Furthermore, they predict that the icy mantel may contain more frozen water than all of the fresh water on Earth.

Whenever water is mentioned, people ask about life. But Thomas says the possibility is "very remote," noting that even if the interior of Ceres were warm enough for some of the water to liquefy, Ceres probably lacked a sufficient energy source for life to develop.

Ceres was discovered in 1801 by Sicilian astronomer Giuseppe Piazzi and declared to be the "missing planet" predicted between Mars and Jupiter. However, the title was revoked in 1802 when Ceres was found to be a member of the hundreds of thousands of other rocks and debris of the Asteroid Belt.

Since the discovery of 2003 UB313 -- which some have hailed as the tenth planet -- in July, some astronomers (and many non-astronomers) have begun to question whether objects such as Ceres should also be enshrined as planets.

Thomas professes a lack of concern about Ceres' place in the solar system. "There are plenty of other interesting things and processes in Ceres to contemplate rather than whether or not it should be called a planet," he said. But for those who prefer a more definitive answer, Thomas offers: "You can call Ceres a 'minor planet' or 'miniplanet' if you'd like, but I would not call it a 'full-fledged planet.'"

Thomas Oberst is a writing intern at the Cornell News Service.