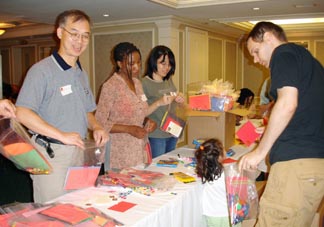 Brenda Tobias
Cornell alumni, their family members and friends assemble care packages Sept. 10 at the Cornell Club in New York City for children displaced by Hurricane Katrina and who are now living in shelters. The event was organized by the Community Outreach Committee (COC) of the Cornell Club-New York Alumni Association Board (CCAAB).

NEW YORK - "Whatever you try to do, try to help other people who cannot help themselves or try to make a difference, because there is nothing more wonderful than service," stated former U.S. Attorney General Janet Reno '60 at Cornell's 2001 Senior Convocation.

And help they did. On Sept. 10 close to 100 Cornell alumni, family and friends filled the Cornell Club to give the smallest victims of Hurricane Katrina a little something to hearten their spirits. Organized by the Community Outreach Committee (COC) of the Cornell Club-New York Alumni Association Board (CCAAB), the event drew Cornellians from across the metropolitan area to assemble care packages for displaced children now living in shelters.

Workstations were overflowing with alumni spanning four decades of classes. Patterns were cut at one table, dolls were sewn at another, and a third group stuffed the faceless dolls into being. Doll decorating kits and coloring books were assembled, packaged and boxed. Note cards were made, written and sealed. Brightly colored stickers, boxes of new crayons and Big Red note cards continuously slid from their heaps as the assembly line workers tried to keep up with production. All the while friends were made, stories shared and snacks consumed.

Jacqueline Silva-Sanchez '05, sewing studiously, paused briefly to explain that she "just wanted to get involved and get connected with the Cornell community here in the city." Many echoed Silva-Sanchez's desire to "do something." Many had already sent monetary donations to the Red Cross, but the opportunity to create something for an individual was a welcome undertaking. Lauren Eisenberg '02 works at Random House and is in the process of organizing a book drive for Katrina victims, Eisenberg said as she used fiberfill to bring a plush doll to life. Creating something specifically for the children particularly appealed to her. The stories coming from the emergency shelters have made a deep impact, she explained, and "seeing the children just makes me cry -- these kids don't have their comfort items."

Clearly, the fallout from the hurricane has profound resonance with many Cornell alumni. On Sept. 11, 2001, Erika Ichinose '03 was in New York City participating in the Urban Semester Program and witnessed "the outpouring of support" following the World Trade Center tragedy. Now, she said, she "wanted to return the favor." Like many of her fellow alumni at the care package drive, Ichinose works for a not-for-profit organization.

For some alumni the seeds of "giving back" were sown when they were students at Cornell, participating in programs with strong public service components, like the Cornell Urban Scholars Program and the Urban Semester program, or as part of the Greek system and religious organizations.

COC is a cooperative effort among active alumni, the Cornell Metro New York Regional Office and the Cornell Club-New York, offering opportunities for leadership and assisting individuals and alumni organizations in recruiting Cornell volunteers for service events. The COC has a venerable history of diving into causes as varied as they are valuable. The committee has organized events with the Holland House (a supportive housing unit in Harlem), coat drives and answering "Dear Santa" letters languishing in the U.S. Postal Service. The crowning events each year are New York Cares Day (Oct. 22 this year) and Cornell Cares Day (the next one is Jan. 7, 2006).

The 372 craft kits and 70 completed dolls made Sept. 10 are headed for shelters, five in New Orleans and two on Long Island. To become involved with COC, contact Katie Antonelli '99 at ksb7@cornell.edu or go to http://ccaab.alumni.cornell.edu.