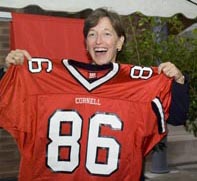 Vice President Susan Murphy proudly shows off the Big Red football jersey she was given by President Hunter R. Rawlings during the dedication ceremony for the newly renamed Murphy Lobby in Court Hall Oct. 14.

In addition to having a Court Hall space named in her honor last week, Vice President Susan Murphy also became an honorary member of the Cornell University football team.

President Hunter Rawlings presented Murphy with a Big Red football jersey during the dedication of the Murphy Lobby in Court Hall on Oct. 14.

"This is Cornell's jersey number eighty-six," said Rawlings, as Murphy displayed the enormous shirt. "It has the following significance: it is large enough for Susan and Jerry [her husband] simultaneously, so we're promoting togetherness."

Earlier in the day, a wing of Court Hall was named for alumni Robert and Virginia Bauer (Class of 1940 and '42, respectively).

About 150 guests, among them friends and family members, attended the lobby naming, which recognized Murphy's commitment to Cornell and the North Campus Residential Initiative. The celebration also acknowledged the gift made in her honor by Penny Haitkin '65 and Ken Nagin '75. The Cornell Marching Band escorted Murphy from Day Hall to North Campus and later played "Give our Regards to Susan," a takeoff on the Cornell fight song with lyrics written by Jim Mazza and Jeff McCarthy.

Murphy thanked Haitkin and Nagin (who was represented by his sister Suzy Nagin-Klass '75) saying, "Their generosity, kindness and support in making this day possible is something that I can't even put into words. I just want to say from the bottom of my heart that it's been an extraordinary day."

Among the guest speakers was alumna Katie Dealy '00, who delivered a tribute to her former mentor. 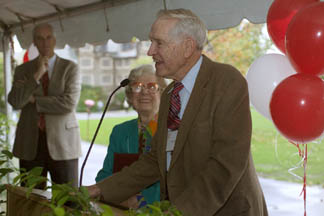 "I have seen Susan as a fierce champion of education, an advocate for students and enriched student life, a dedicated egalitarian, talented delegator, consummate diplomat, accomplished leader and awe-inspiring role model, leader and friend," said Dealy. "She is frankly someone you would want to entrust your acquaintance, close colleague or beloved child with. That she transcends these myriad roles so easily is astounding. That she does so while inspiring those of us in her wake is remarkable, and that she seeks no acknowledgment for these accomplishments is unbelievable."

Murphy earned her first Cornell degree as a history major in 1973. She worked for a time as a high school guidance counselor, then returned to Cornell in 1978 as associate director of admissions. Eventually she became the Ivy League's first female dean of admissions and financial aid. In that role, she became a national advocate for student financial aid, while also working to increase the diversity of Cornell's student population.

Despite managing a staff of 70 and being on the road often a week a month, Murphy completed her Cornell Ph.D. in educational administration in 1994, which then President Frank Rhodes presented to her at Cornell's 126th Commencement. Rhodes also was among the guests at the Court Hall lobby dedication.

Earlier in the day Murphy delivered welcoming remarks for the naming of Bauer Hall, one of the three wings of Court Hall, in honor of the Bauers. Duffield Hall's Bauer Laboratory and the funding of scholarships in the College of Engineering are among the couple's other contributions to the university. Members of the Bauer family were present to enjoy "Bauer Bits O' Bliss," an ice cream created by the Cornell Dairy Store especially for the occasion.

Gifts for the North Campus renamings will be used to help support the West Campus Residential Initiative.