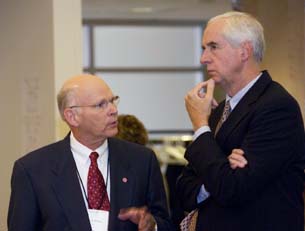 Kevin Stearns/University Photography
Chairman of the Board of Trustees, Peter Meinig, left, confers with President Hunter Rawlings at the Oct. 21 open meeting during Trustee/Council Weekend.

The Cornell University Council has been reviewing several new initiatives, including the possibility that prospective freshmen will be able to apply to both a primary and an alternate college at Cornell, beginning in the fall of 2007.

This was noted on Oct. 21 by Jay W. Waks, incoming chair of the council. His remarks preceded Interim President Hunter Rawlings' State of the University address at the annual Trustee/Council Weekend in Statler Auditorium.

Waks also recapped other council accomplishments, such as its financial aid scholarship program, which, he said, is at a new high mark, spending well over $90 million in aid a year. He noted that the council was also pleased to report that it had raised more than $270,000 to honor Ralph Janis '66, director of Cornell Adult University (CAU), with a CAU history course in his name every summer.

Waks also said that among Cornell's many attractions "is our paramount treasure, the Adam and Eve of all Cornell treasures, our diversity. It is ironic, if not outright incredible, that Ezra Cornell, in his wisdom and foresight, defined the greatness of our university with those four simple words: 'any person . . . any study.'" In that tradition, he announced that the council had appointed a special ambassador task force to ensure the expansion of the university's diversity of people and scholarship.

Also speaking at the State of the University event was Peter Meinig '61, BME '62, chair of the Cornell Board of Trustees, who thanked former President Jeffrey Lehman and his wife, Kathy, for their two years of service to Cornell. He noted that "Cornell is hot and getting hotter as a first choice among talented high school seniors." He introduced several new trustees to the audience and thanked Rawlings for his willingness "to step back into the presidency [which] allows us to keep pace with our ambitions."

He noted that the Presidential Search Committee is diligently at work, with input from meetings in Ithaca, New York City and Doha for students, faculty, alumni and staff. "Members of the search committee are already meeting with an impressive list of interested candidates," he said."

Meinig concluded the event by saying, "Like all great, dynamic institutions, Cornell is a work in progress. A vital, exhilarating -- and daunting -- task remains before us: to make Cornell even greater than it is, in world-transforming research, in the education of undergraduates, graduate and professional students, making a difference -- in individual lives, in our country and around the globe." And he thanked the trustees and council members for their commitment to help Cornell with that task.