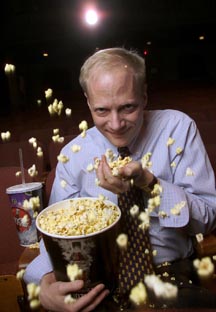 Large portions push people to overeat -- even to overeat foods they don't like.

"We're finding that portion size can influence intake as much as taste," said Brian Wansink, the John S. Dyson Professor of Marketing and of Applied Economics at Cornell. "Large packages and containers can lead to overeating foods we do not even find appealing."

There is, however, a silver lining to the findings -- that portion sizes can be used to increase the consumption of less appetizing, but healthy foods, such as raw vegetables, said Wansink. "While a small bowl of raw carrots might make for a good afternoon snack, a large bowl might be even better."

The study is published in the September/October issue of the Journal of Nutrition Education and Behavior (Vol. 37:5).

Wansink and Junong Kim, assistant professor of marketing at the University of Central Florida, gave 158 moviegoers either medium (4.2 oz) or large (8.4 oz) tubs of free popcorn that was either fresh or 14 days old. The researchers asked the moviegoers to describe the popcorn after the movie, and they weighed how much popcorn was left in the containers. As expected, the 14-day-old popcorn was described with such remarks as "stale" and "it was terrible."

When the moviegoers were asked if they thought they ate more because of the size of the container, 77 percent of those given the large tubs said they would have eaten the same amount if given a medium container. "This means that the moviegoers were unaware that the exceptional amount they ate was due to the size of the container," said Wansink, who also is the author of the new book, "Marketing Nutrition: Soy, Functional Foods, Biotechnology, and Obesity," and director of the Cornell Food and Brand Lab, made up of a group of interdisciplinary researchers who have conducted more than 200 studies on the psychology behind what people eat and how often they eat it.

Several of Wansink's previous studies show that larger portions prompt people to eat more not because of a clean-your-plate mentality, but because large packages and portions suggest larger consumption norms. "They implicitly suggest what might be construed as a 'normal' or 'appropriate' amount to consume," said Wansink, who tested this concept in 1996 with volunteers given different-sized bags of M&Ms that were too large to be finished while watching a videotape; those given larger bags ate twice as much as those with smaller bags.

In another similar 2001 study of popcorn and moviegoers, Wansink found that people not only significantly underestimate the calorie content of what they eat, but discount even more the calorie content of food they eat but don't like. "When asked how many ounces or calories they had eaten, both groups -- those given either medium or really large buckets of popcorn -- reported about the same amount," Wansink said.

Another factor is that while people tend to acknowledge that portion size and container size may influence other people, they often wrongly believe they themselves are unaffected, Wansink found in a 2004 study. "This suggests that portion and package size may insidiously influence people at a basic level of which they are not aware or do not monitor," Wansink warned.