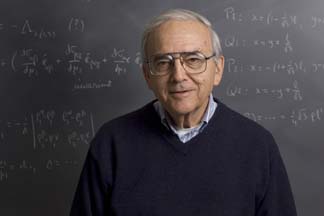 Benjamin Widom, Cornell's Goldwin Smith Professor of Chemistry and Chemical Biology and a faculty member for more than half a century, is the honoree of a special issue of the journal Molecular Physics published this month (Vol. 103, No. 21-23).

In the issue's foreword, journal editor Jean-Pierre Hansen and University of Oxford chemist Sir John Rowlinson call Widom "one of the most respected and influential figures in theoretical chemistry and statistical mechanics, worldwide."

Widom is perhaps best known for his work toward understanding the properties of substances near the critical point -- the point at which two phases of the substance (water and water vapor, for example) lose their distinguishing features and behave as one, or at a tricritical point, where three previously distinct phases lose their separate identities. In the 1960s Widom derived so-called scaling relations, accounting for critical-point anomalies seen in experiments. His work is recognized as an important precursor to the renormalization-group theory of critical phenomena, for which Cornell colleague Kenneth Wilson was awarded the 1982 Nobel Prize in physics.

Also in the 1960s, Widom co-wrote a paper with the late Christopher Longuet-Higgins of the University of Sussex, England, which provided a clear picture of simple fluids by integrating the concept of a repulsive force between molecules (which they characterized as hard spheres) with the van der Waals principle of a weak attraction between them at intermediate distances. The paper was the first to successfully explain the changes in energy, entropy and volume accompanying the phase transition of liquids of simple molecules. And Widom's potential distribution theory, which allows researchers to calculate a fluid's chemical potential through computer simulation, was a major advance in the theory of fluids.

In his 51 years on the Cornell faculty (during three of which he served as chair of the chemistry department), Widom has also pioneered work on the structure and tension (surface tension) of the interface between two phases. More recently he has extended that work to include line tension, or the interface between three phases, a subject he and Rowlinson discussed in the 1982 book "The Molecular Theory of Capillarity."

"Professor Widom is a towering figure in statistical mechanics of liquids, phase transitions and critical phenomena," said journal editor Hansen, who is also professor of theoretical chemistry in the University of Cambridge chemistry department. "It was quite obvious that his ground-breaking contributions more than deserved a fitting tribute in Molecular Physics."

Widom's recent graduate students agree. "[Widom] has time and again demonstrated that devising and understanding simple models (many of whose properties can be calculated using pen and paper) further chemical understanding," said Prabhakar Bhimalapuram, a research associate at the University of Chicago. "His work on models of microemulsions, interfaces and hydrophobic effects are testimony to this fact."

Alan van Giessen, research associate at Boston University, calls Widom "simply the best teacher I have ever come across. He has a marvelous way of taking a complicated mathematical expression and explaining it in terms of the physics of the system, such that it becomes almost obvious. Ben spends his afternoons, or as much of them as he can, in his office, at his desk, doing research. He comes in on Saturday to do research. He loves it."

Added van Giessen: "I know it's all glowing probably a bit over the top, but Ben is a fantastic scientist and a lovely person."

Rowlinson wrote a summary of Widom's career for Molecular Physics. He closed it with quiet appreciation.

"The details of the behaviour of the boundaries between three phases have proved to be more subtle than might have been expected, but he seems to have mastered them all.

"This issue of Molecular Physics is therefore but a small additional tribute to one who has played, with unfailing good fellowship, a leading role in the theoretical chemistry and physics of our generation."