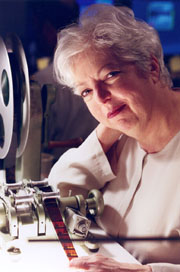 ITHACA, N.Y. -- Academy Award-winning film editor Thelma Schoonmaker '61 will show some of her artistry, as seen in "Raging Bull," "The Aviator" and other movies, when she visits Cornell on Saturday, Nov. 19.

Schoonmaker will present highlights from her career, including her contributions to several features and documentaries directed by Martin Scorsese, at a tribute in Cornell Cinema's Willard Straight Theatre.

The 7:30 p.m. event, presented by The Atkinson Forum, will feature questions from the audience and an interview on stage by film scholar Kent Jones, associate director of programming at the Film Society of Lincoln Center and editor-at-large for Film Comment magazine. A reception in the theater lobby will follow the program.

Tickets for the evening are free and limited to two per person, available starting Monday, Nov. 14, at the Willard Straight Hall Ticket Desk.

Born in Algeria, Schoonmaker studied Russian and government at Cornell and planned a career in international relations -- until she was turned down for a job in the State Department and answered a classified ad to train as a film editor. She took a six-week summer course in the film program at New York University, where she met Scorsese and helped him edit his student film; he later enlisted her to edit his first feature, "Who's That Knocking at My Door?"

Schoonmaker is currently working on Scorsese's next film, "The Departed," a remake (set in Boston) of the Hong Kong police drama "Infernal Affairs." She told The Cornell Daily Sun in 1995 that she and Scorsese are "almost like one mind in the editing room."

During November, Cornell Cinema is showing several of Schoonmaker's collaborations with Scorsese: "Goodfellas," "Raging Bull," "The Aviator," "Kundun" (the 1997 biography of the young Dalai Lama) and "Il Mio Viaggio in Italia (My Voyage to Italy)," the director's anecdotal survey of the masterpieces of postwar Italian cinema.

Outside of the editing room, Schoonmaker devotes much of her time to promoting and preserving the films and writings of her late husband, British director Michael Powell. As part of a worldwide commemoration of the centenary of Powell's birth, Cornell Cinema also is featuring his movies in November.

For more information and a schedule of screenings and other events, contact Cornell Cinema at (607) 255-3883 or visit http://cinema.cornell.edu.