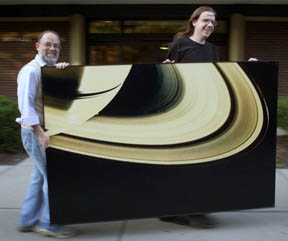 By watching a distant star as it passed behind Saturn's outer rings, Cornell University astronomers on NASA's Cassini-Huygens mission to Saturn have found the most direct evidence to date of patterns, called gravitational wakes, within the planet's outer rings.

The patterns, thin, parallel striations like spokes on a pinwheel, have been theorized since the 1970s, but their small scale (just 100 meters – 328 feet – wide) makes them impossible to see even with the spacecraft's high-resolution camera. The new evidence of their existence, says Phil Nicholson, Cornell professor of astronomy, gives scientists clues about how thick Saturn's rings are and how their constituent bodies interact.

Nicholson presented his findings in September at the American Astronomical Society's 37th Division for Planetary Sciences meeting in Cambridge, England.

At this wavelength the brightness of the icy rings themselves is at a minimum, permitting the star to be seen most clearly.

The brightness of omicron Ceti was measured once every 80 milliseconds, during which time the star moved approximately 1.2 km across the rings.

The apparent diameter of the star, as projected onto the ring plane, was about 4 km, so that each individual measurement represents an average over many individual wakes.

Nicholson and postdoctoral researcher Matt Hedman used Cassini's visual and infrared mapping spectrometer (VIMS) to take spectra of the star Omicron Ceti (also known as Mira) in quick succession during four three-hour intervals, or stellar occultations, during which the star passed behind Saturn's A and B rings. (The A ring is the planet's outermost visible ring; the B ring is closer to Saturn.) With the more than 100,000 spectra from each occultation, Nicholson and Hedman plotted the amount of near-infrared light that filtered through the rings. They then compared the optical depth – the amount of light blocked by the ring material – at several points throughout the occultation. In the comparison, they noticed an unexpected asymmetry: More light filtered through at points on the star's way out of the occultation than at corresponding points equidistant from the planet on the star's way in.

At first, Nicholson and Hedman considered whether the asymmetry could be explained by the spacecraft's slight shift in vantage point over the occultation. But Nicholson pointed out that the distance between the spacecraft and the star is virtually infinite. Lines drawn between the two at either end of the occultation are for all practical purposes parallel – so the angle between the ring plane and the line of sight between Cassini and the star doesn't change significantly.

More likely, said Nicholson, is that the small chunks of water ice that comprise the rings are arranged in stripes radiating outward at a skewed angle, like spokes on a pinwheel. The so-called gravitational wakes form when the small objects' gravitational attraction to each other competes with the tendency of tidal forces from Saturn to pull them apart.

Though Cassini, which arrived at the giant planet in June 2004, can't get close enough to see the wakes directly (the spacecraft was about 1.6 million kilometers away from Saturn when the occultations occurred), Nicholson has already heard from other Cassini researchers with independent observations supporting the existence of gravitational wakes.

"I suspect in the end that many Cassini instruments will be seeing the same kind of phenomenon," he said. Still, while he expected some evidence of the wakes, the spacecraft's position during the occultations – with only 3.5 degrees between the ring plane and the line of sight to the star – made the effect striking.

"We were certainly surprised," he said. "We were not expecting it to be as obvious. At one level, it's just kind of neat to us who study rings. For those of us in the business it's nice to get direct evidence of the wakes."

On a more practical level, though, the finding gives scientists a new piece of information about the rings' micro-structure and internal dynamics: specifically, how the ice chunks move as they are pulled toward each other and collide, and as Saturn's tidal force shears them apart again.

It also gives researchers a tool for judging the overall thickness of Saturn's rings. Throughout Cassini's four-year mission, astronomers will collect data from dozens of similar experiments. Since each will be made from a different viewing angle, astronomers will then compare how marked the wakes' effect is across the series. That information will allow them to estimate the rings' thickness (their north-south span) – which is thought to be as little as 10 meters – 33 feet.

Using the wakes to estimate the rings' thickness is similar to using sunlight to estimate the widths of slats on a set of vertical blinds. If the blinds are open and the sun is high in the sky, the blinds will let in nearly all the light. But as the sun sets to one side, the blinds – in the same position – will begin to block more and more light, because of their width. Similarly, if the rings are very thick, the spacecraft will continue to see the wakes' effect from higher elevations; if they are very thin, evidence of the wakes will begin to diminish when the angle between Cassini's line of sight and the ring plane is still quite small.

"This may be the best way of directly learning the thickness of the rings," Nicholson said.

Cassini's VIMS team is led by Robert Brown at the University of Arizona's Lunar and Planetary Laboratory. During Cassini's Saturn tour, the spacecraft will complete 74 orbits of the planet, 45 flybys of the moon Titan and many flybys of Saturn's other moons.