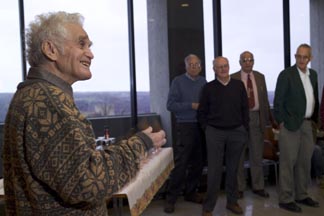 In stature, Yuri Orlov, 81, is small. But in every other dimension, he is a giant.

Orlov, a senior scientist in Cornell University's F.R. Newman Laboratory for Elementary-Particle Physics, is the first recipient of the Andrei Sakharov Prize, created by the American Physical Society (APS) to honor scientists for exceptional work in promoting human rights. The prize will be presented at the April meeting of the APS in Dallas.

As a physicist, Orlov is known for his expertise in quantum mechanics and particle accelerator design. He studied under the legendary theorist Lev Landau and others at the Physico-technical Department of Moscow University until he lost his research position in the 1950s for speaking out for democratic rights. Narrowly avoiding imprisonment, he left Moscow for the Yerevan Physics Institute in Armenia, where he finished his doctoral degree (1958) and ultimately became chief of the Laboratory of Electro-magnetic Interaction.

In 1973 Orlov returned to Moscow to a research position at the Institute of Terrestrial Magnetism and Distribution of Radio-Waves. He co-founded the Moscow chapter of Amnesty International that year; three years later he founded the Moscow Helsinki Group, one of the first efforts in the international Helsinki human rights monitoring movement. In 1977 he was arrested by the KGB and sent to the gulag, a hard-labor camp in Siberia.

An agreement between Soviet leader Mikhail Gorbachev and President Ronald Reagan secured Orlov's release, and he emigrated to the United States in 1986. Frail and sick, he took a position in Cornell's physics department, whose faculty had lobbied for his release -- and he began the long, slow process of recovery and relearning.

In 1995, Orlov was awarded the Nicholson Medal for Humanitarian Service (now called the Nicholson Medal for Human Outreach), also by the APS. The award cited Orlov "for uniting his love of physics with an intense dedication to international human rights; for his public espousal of openness and freedom in the face of severe personal consequences; for co-founding the Moscow chapter of Amnesty International and founding the first Helsinki Watch group; for his outspoken support of Andrei Sakharov and for his continuing work for democratic principles in former-U.S.S.R. countries, in China and in Bosnia. [His] commitment and accomplishments have inspired a generation of fighters for freedom worldwide."

Sakharov, who died in 1989, was a Soviet physicist who became, in the words of the Nobel Peace Prize Committee, "a spokesman for the conscience of mankind." He was known as the father of the Soviet hydrogen bomb but gradually became one of the regime's most vocal critics and a defender of human rights and democracy.

"Most physicists with whom I have spoken believe that there could be no better recipient than Orlov for the first Sakharov Prize," said John Gillespie, APS selection committee chair and professor of physics at Lehman College, City University of New York.

At a department celebration last week in Orlov's honor, Kurt Gottfried, professor emeritus of physics at Cornell, echoed the sentiment. "He is second only to Sakharov," said Gottfried. "If you meet any Russian émigré of the period, they would tell you that. He reached out to ethnic groups. He built broad relationships."

"He's really contributed a lot to the research of the department," said Saul Teukolsky, chair of Cornell's physics department. "Getting him here was a great asset."

Orlov, who currently divides his time between Cornell's Newman Laboratory and the Brookhaven National Laboratory on Long Island, is still active in human rights work in Russia and the United States. There will always be a need for such work, he said -- especially now, as developing countries look to the United States to set an example.

For the support and friendship he has found at Cornell, he said, he is deeply grateful.

"I want to simply thank the university for your hospitality," he said. "Your patience was important for me because of issues of recovery."

"It's a little bit of a big interruption," he said of his imprisonment in the Siberian gulag. "I forgot very much. But I am fine, very much -- now."