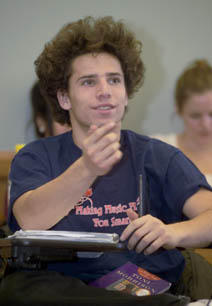 Cornell University students plunged headlong this semester into the works of some of the university's most acclaimed writers.

Cornell's literary legacy includes alumni and cultural icons Kurt Vonnegut Jr., Toni Morrison, Thomas Pynchon and Richard Fariña, and instructors Alison Lurie and Vladimir Nabokov. These authors and many others were read and discussed in English Professor Molly Hite's course The Great American Cornell Novel, which was offered this fall for the first time.

While she was formulating the course with the English department, Hite says, "we were talking about ways to make sure the writers got more publicity, and since then the idea has been to make it a really big course."

Meeting three times a week, the class read its way through a lengthy syllabus including short stories by Robert Morgan, Lorrie Moore and Stewart O'Nan, novels such as Vonnegut's "Slaughterhouse-Five," Morrison's "The Bluest Eye" and what the syllabus refers to as "Novels Set At (A University Very Much Like) Cornell" -- including Nabokov's "Pale Fire" and Lurie's "The War Between the Tates."

The topic has appealed to a broad spectrum of students, well beyond English majors and aspiring novelists.

"These people are all over the place -- they're from all the colleges, freshmen through seniors -- it's an amazing mix," Hite says.

"I noticed there are an alarming number of writers who have a science background," said Thomas Beckwith '09, citing O'Nan, an aerospace engineer and an established writer before coming to Cornell in 1991, and poet A.R. Ammons, who had a degree in engineering. Vonnegut also began his career as a technical writer for General Electric, a job that inspired his early fiction.

"This is one of the few places where that cross exists" between literature and the sciences, Hite told the class. "It raises the question: Do you have to be an engineer to be a major writer?"

"They've been excellent, engaging with and writing on the material," Hite says of the students.

"I liked most of the books we read, and even the ones I didn't like, I enjoyed the discussions about them," said Mickey Pearlstein-Gluck '08. "It was analytical -- she talks about 'unpacking' passages. Sometimes that can be even more important than the plot itself. So I definitely think I matured as a reader this semester."

"I didn't plan this [course] as having special relevance to the lives of 18- to 22-year-olds, but it does," Hite says. In a discussion of Maureen McCoy's "Junebug," "we talked a lot about how mother-daughter relationships are fraught -- and mother-son relationships, too."

The course includes a section on "Cornell Writers Here and Now." After students did the assigned reading, Hite invited some of the authors who are current or emeritus Cornell faculty members to come in and talk to the class about their work. (Some of the students tried, unsuccessfully, to get her to invite the reclusive Pynchon, Hite says.)

"Our writers are teachers, and consequently they're not like other writers," Hite says. "They're poised, they're relaxed, they're good at interchange with students. They know how to get students talking."

When Lurie visited, she talked about the campus protests of the 1960s and stressed the importance of research. When a student asked about the acid trip she describes in "Tates," Lurie revealed that it was written from experience.

"I count these [people] as my friends, but some of the best literature in America has come out of Cornell," Hite says.

Viramontes said Hite's course underscored for the English faculty the "talent and experience" present in Cornell's creative writing program, which celebrates its 100th anniversary in 2009.

"I talked about my experience as a political activist [and] about literature having transformative powers," said Viramontes, an associate professor of creative writing whose novel "Under the Feet of Jesus" was read and analyzed by the class. "The most touching thing, I have to say, is there were a few of my writing students in there."

For authors covered by the course, Hite gives a little background on their personal history and their association with Cornell, including Morrison's tenure as an A.D. White Professor at Large.

Fariña, a well-known songwriter and a friend to Pynchon and Bob Dylan, died in a motorcycle accident in 1966, two days after the publication of his generation-defining novel "Been Down So Long It Looks Like Up To Me." Hite played some of Fariña's songs in class, including "Pack Up Your Sorrows," and the reaction was "'He wrote that?'" Hite says.