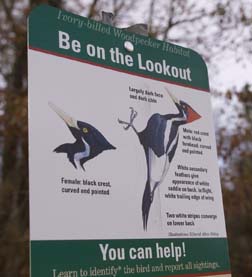 Jason Koski/University Photography
A sign along the Bayou DeView alerts visitors to keep watch for the Ivory-billed Woodpecker.

Elvis. That is the nickname that Larry Mallard, refuge manager for the White River National Wildlife Refuge in southeastern Arkansas, uses for the ivory-billed woodpecker (Campephilus principalis), now being sought in Mallard's woods by Cornell Lab of Ornithology staffers and volunteers.

Mallard betrays a hint of mixed feelings: He has been managing the area for other endangered species, but only since the woodpecker's rediscovery has the refuge's conservation needs received any attention.

"Elvis is the rock star," said Mallard about the elusive woodpecker. "It's one thing to have endangered species. It's another thing to have a species that's been gone for 60 years that reappeared." But he fully appreciates that the bird has brought attention, and could bring money, to the area in an era when national wildlife refuge budgets are low. "You've got to take advantage of what comes along."

The bottomland forest of Arkansas, called the Big Woods, encompasses 550,000 acres, 130 miles long and up to 15 miles wide, and includes both the Cache River and the White River National Wildlife Refuges (NWR). Cornell has led two searches since the bird's rediscovery in February 2004 in a section of the Cache River NWR called the Bayou DeView, near Brinkley, Ark. The goal of the current search, which began in November, is to find an ivory-billed woodpecker and its roost or nest, which the bird will return to repeatedly, allowing for in-depth study of its habits.

The area's habitat is well-suited for the woodpecker because its dead and dying hardwoods -- tupelo, oak, sycamore, sweet pecan and sweet gum trees -- attract the giant insect grubs that the bird eats. Few other mature, old-growth forests remain in the Southeast due to logging and the growth of agriculture in the 20th century.

The habitat also has plenty of cypress trees (a conifer) that provide holes for the birds to roost or nest in.

There have been 18 credible sightings of the ivory-billed woodpecker since the bird's rediscovery, and all have been within a few miles of each other in the Bayou DeView. These glimpses may amount to a single woodpecker in the area.

The Bayou DeView is a very narrow, fingerlike tributary that leads to the Cache River, which in turn flows into the White River, and then into the Mississippi. Although spotting the woodpecker may be like finding "a flying needle in a haystack," this long, narrow corridor of bayou makes it easier for people to spot a bird flying by. Because of its old growth, it is also home to long-horned beetle larvae, the ivory-billed's version of filet mignon.

"Bayou DeView contains the highest density of dead and dying woods," said Martjan Lammertink, a world woodpecker authority hired by the Lab of Ornithology in 2004 by Cornell to help with the search. 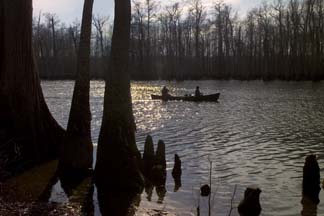 Jason Koski/University Photography
Hickson Lake in the Cache River Wildlife Refuge is one of the areas where researchers have been focusing their efforts in the hunt for the ivory-billed woodpecker.

The White River NWR also has shown promising signs of the woodpecker. Last year's recordings from autonomous recording units, digital recorders placed by the Lab of Ornithology in key habitats, picked up calls and characteristic double-knocks, a rapid two-beat drumming sound unique to the ivory-billed woodpecker. One of these recordings contains a double-knock nearby followed by another in the distance, suggesting two woodpeckers in the area.

A study of Magellenic woodpeckers found in Chile and Argentina, one of two other Campephilus woodpeckers in the world, offers perhaps the best model for studying the ivory-billed woodpecker's behavior. "Magellenic woodpeckers knock occasionally when in a pair, to let each other know where they are. But if alone, it would double-knock continuously," said Lammertink.

In the southern White River NWR, about 20 people have been methodically transecting the area where the double-knocks and calls were recorded in search of a roost hole housing the rare bird. To date, search team members in this area have found evidence of stripped bark typical of an ivory-billed woodpecker.

While the pileated woodpecker sits with its feet straight on the tree and hits the tree straight with its beak to create rows of baseball-sized holes, the Campephilus woodpecker's feet grab the tree with a wider, sideways stance, almost hugging the trunk. The woodpecker can then use its powerful bill to take lateral blows that peel away a bark layer that is fairly tight on a tree.

The ivory-billed woodpecker is unique in going after trees that have only recently died and peeling bark for the large grubs that are out of reach of any other bird.