As Cornell plans for its next capital campaign, it faces some of the challenges and opportunities present during the last campaign a decade ago. But the university also faces new challenges that have a bearing on Cornell's ability to deliver world-class education and research in the future. The last campaign set records with more than 96,000 individual gifts and the grassroots participation of 2,300 volunteers, raising nearly $205 million for student financial aid, $146 million for faculty support, $589 million for academic programs, $129 million for facilities and $59 million for the university library.

Recently, interim Vice President for Alumni Affairs and Development Laura L. Toy sat down with the Chronicle's Joe Wilensky and Daniel Aloi to talk about the challenges and expectations for the latest fund-raising effort, which could be launched with a public announcement as early as fall 2006. 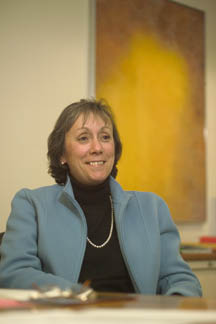 Let's start by talking about the experience of Cornell's last major capital campaign, which raised $1.507 billion from 1988 to 1995.

One of the more significant things about the last campaign was its focus on endowment as an institutional need. And I think one of the reasons we've been so successful in raising money for endowment since then has been the foundation laid during that campaign. When you look at the number of endowed positions going into it as well as the number of endowed scholarships, it's where we saw significant growth. From the university's founding until 1988, when the nucleus fund phase for the last campaign began, 130 positions were endowed. Between 1988 and 1995 there were another 118 added -- an increase of 91 percent in just a seven-year period. Further, there was a 114 percent increase in the number of student aid endowments. So there was some pretty significant growth.

Does that go along with the changing nature of endowments in higher education, and some aspects of how universities are funded?

I think what we've seen is that over time, government support as a percentage has diminished, and as a result endowment has become increasingly important to Cornell.

How are the university's needs different or greater now than a decade ago?

Endowment continues to be a high priority for Cornell, and we still lag behind many of our peers in endowment per student. As the cost of education goes up, the needs associated with financial aid go up at the same time. And Cornell is committed to maintaining its need-blind admissions policy -- admitting students based on their academic qualifications, not their ability to pay. Over 60 percent of our student body receives some sort of financial aid. [Ed: Compared with 37 percent of the student population in 1995.] We've made a lot of progress in helping those students with the greatest need, but we're seeing that the cost of a Cornell education has become more difficult for members of the middle class to afford.

Cornell also faces challenges related to the recruitment and retention of faculty. Demographics are such that over the course of the next decade, as many as a third of our faculty may retire. We need to ensure that resources are available to recruit new faculty but also to maintain our current stars.

There are also several very large capital projects that will be part of the campaign -- large in terms of scale and cost. They include the Residential Initiative, as well as important interdisciplinary research and teaching facilities, such as the Life Sciences Technology Building, Milstein Hall, a new building for the physical sciences and facilities for Computing and Information Science.

What is the timetable for the capital campaign moving forward from the silent phase to a public announcement, and the stages to follow?

We have a definite starting point and a definite end point. Those are two certainties. The starting point was July 1, 2004, when we began the nucleus fund phase. That's when we counted our first dollar. The campaign will end in 2011. So it's a seven-year campaign. We are proceeding as if we are going to have a two-year quiet nucleus fund phase and a five-year public phase. The nucleus fund phase is where you begin to test campaign priorities and to assess how the institution's needs resonate with prospective donors. It's also a time to build the prospect pool and to hone planning. All the while, we're working very closely with the provost, Biddy Martin, and the deans to be certain campaign priorities align with the university's academic needs.

What are the principal areas of funding needs?

The overarching needs are: first, for students -- funds to ensure that the best and brightest, both undergraduates as well as those in our professional schools, are able to afford a Cornell education and that we keep our need-blind admissions policy strong; faculty -- support to recruit top faculty and to retain our best professors, including graduate fellowships; an environment that inspires teaching and learning, which includes facilities that support the increasingly interdisciplinary nature of education and scientific research; investments in several of Cornell's strategic research initiatives where Cornell has the unique potential to lead the world -- the life sciences, computer and information science, and sustainability; and support of the Cornell Annual Fund.

Is there an interdisciplinary aspect to the campaign, to mirror the nature of academics at Cornell?

Because the campaign priorities are being driven by academic priorities, there are indeed interdisciplinary aspects to the campaign. A prime example would be the New Life Sciences Initiative, which impacts virtually every school and college at Cornell. But we're also seeing examples of opportunities that bridge the College of Engineering with the Johnson School, and the Law School with the College of Arts and Sciences, to name a few.

What about the challenges of raising funds in the present economic climate?

One of the nice things about a campaign is that it's typically long enough that you have time to cycle into something or cycle out of it. We're off to a very good start. The numbers have to keep going up, but certainly people don't seem to be hiding behind a bad economy. Right now we've really been focused on people who are very close to Cornell, including trustees. We'll expand our reach farther and farther as the campaign progresses, and in the end hope we may see the same, if not a higher, level of participation as we did in our last campaign.

Weill Cornell Medical College announced its plans in April for a campaign to fund collaborative and synergistic cross-campus initiatives. Will that be part of this campaign?

This will be a "Cornell campaign" and will include the medical college, as well as all of Ithaca. In addition to campus-specific goals, there will also be some portion for initiatives that foster collaborations between the Ithaca campus and Weill Cornell. This will be a first for us, and we're looking forward to working closely with our colleagues in New York.

With the search still on for a permanent replacement for Jeffrey Lehman as university president -- and Hunter Rawlings' previous fund-raising experience notwithstanding -- is this the right time for the university to mount another fund-raising effort?

We can't look back; we're already out of the blocks. And to be honest, we really never considered slowing down. We're currently planning to begin the public phase of the campaign as early as next fall. The timing of such an announcement, of course, will depend on a number of things. For instance, our new president will need to be fully supportive of the timing, and before a public kick-off, we hope to have full participation by the board of trustees. Finally, we'll want a significant portion of the goal already committed, probably as much as 35 to 40 percent.

Has the abrupt nature of Lehman's departure affected giving, either positively or negatively?

It has not affected it negatively, on the whole. There have been some number of people who have said, "I want to wait and see who the next president is," and we're asking people for very large gifts, and that's a fair response. On the other hand, there's an equal if not [greater] number of people who have said, "I really need to come forward and show my leadership and my confidence in the institution." People are giving to Cornell -- yes, the people are important, but they're not giving to Jeff Lehman or to [former Vice President for Alumni Affairs and Development] Inge Reichenbach or to Hunter Rawlings or to Laura Toy; they're giving to Cornell, because that's where the real allegiance is.

What plans does the university have to increase the endowment per student, currently the lowest ratio in the Ivy League?

You can increase the endowment two ways. One is the return on investment, which is in Don Fehrs' good hands [at the Cornell Investment Office]. The other is by adding to principal. Our ultimate campaign goal will include a significant portion for endowment, thereby adding in large measure to the principal.

How does annual giving fit into the fund-raising picture?

One of the things that is very precious -- and Biddy Martin reminds me of this often, as do the deans -- is annual fund support. The annual fund is an important revenue source that can bridge the gap that endowment and tuition can't cover, by providing funds to meet immediate and unexpected needs. And our goal over the life of this campaign is to double the gifts that come in to the Cornell Annual Fund, going from just over $10 million per year to over $20 million per year. We really want to grow the annual fund over the life of the campaign. The Cornell Annual Fund goes on forever. And just because a campaign ends, it doesn't mean we'll stop raising money. Coming out of the last campaign, we continued to see a real upward trend in terms of gifts per year. The momentum from this campaign I believe will extend far beyond 2011.