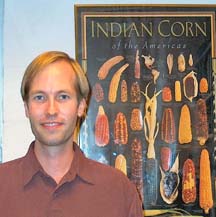 Cornell University researchers have improved a technique called association mapping that identifies the genetic origins of complex traits, from disease to crop yields to milk yields, controlled by multiple genes.

Geneticists can now more accurately determine which genes control these complex traits by eliminating false positives (significant results produced by chance) that result when individuals are related (from familial to population levels) and share genetic variations.

"The new method will be very useful for a variety of applications, from plant and animal breeding in identifying genomic regions that are responsible for higher nutritional value to human genetics in pinpointing genetic causes of human diseases," said Jianming Yu, a postdoctoral researcher in Cornell's Institute for Genomic Diversity. He is a lead author of a paper published in Nature Genetics online on Dec. 25 and appearing in a forthcoming print issue.

One of the big challenges geneticists face in accurately determining relationships between genes and the traits they control is how to rule out factors that lead to false positives. One such factor is population structure -- how populations are subdivided or isolated and how geographical or environmental selection pressures alter genetic variation over time.

Familial relatedness, found naturally in populations, is the other major factor that determines how genetic variation is shared. While population structures account for coarse genetic changes that occurred over very long time scales, genes altered by family relatedness are finer and more recent -- perhaps occurring within the most recent 10 generations.

A hypothetical "chopstick" gene provides a simple example of how spurious associations might occur. Geneticists searching for such a gene might notice that Asians are far better at using chopsticks than Westerners. By comparing the genomes of people from the East and West, the researchers might find many genetic markers in Asians that correlate with chopstick use. But in truth, the phenotype (ability to use chopsticks) and a gene that frequently appears in Asians are not related at all, since the ability to use chopsticks is cultural rather than genetic. The false positive occurs simply because these two populations show different genetic variation.

The new method uses statistical techniques to rule out such false positives. Researchers can tell that the method is accurate because the results behave according to the rules of a good statistical test.

"If you are not controlling for population structure and familial relatedness, you would have more positive correlations than you would expect by chance alone," said Gael Pressoir, a postdoctoral researcher in Cornell's Institute for Genomic Diversity and a lead author of the Nature Genetics paper.

The research combines statistical and molecular genetic trends from plant, human and cattle genetics. In plant genetics, researchers focus on markers -- random mutations in a DNA sequence that act as genetic milestones -- to estimate genetic relationships; in human genetics, they focus on models of population differences; and in cattle genetics, they focus on statistical analyses of complex pedigrees. However, the researchers found that using genetic markers with these statistical trends is the best way to account for the effects of population structure and familial relatedness.

"The method performs better than other approaches as it fully utilizes genomic information in defining relationships among individuals rather than known records, such as demography or pedigree ancestry, which can be unreliable and incomplete," said the paper's senior author, Ed Buckler, a U.S. Department of Agriculture-Agricultural Research Station (USDA-ARS) research geneticist in Cornell's Institute for Genomic Diversity and an adjunct associate professor in Cornell's Department of Plant Breeding.

The work was supported by the National Science Foundation and the USDA-ARS.